Throughout their time in Vietnam, the crew of 9 Squadron would come under enemy fire time and time again, and this would only increase in likelihood as the war went on. However, during the initial days of the conflict, many pilots and crewmen were not yet exposed to the true dangers posed not just by the North Vietnamese Army, but by Viet Cong guerrillas within their own areas regions of control.

The nature of combat in Vietnam paired with the technology of the time made helicopter operations dangerous. Viet Cong positions were usually entrenched, or worse yet well camouflaged and able to reposition without being spotted. This would become evident to Australian forces early on.

The Battle of Long tan in August of 1966 was proof of the Viet Congs dynamic guerilla warfare techniques – posing a threat to both ground forces and anyone in the air who got too close. Despite this threat, the Battle of Long Tan saw no casualties amongst RAAF 9 Squadron personnel.

It would not be until 29 July 1967 that the RAAF would suffer their first wounded. While flying a resupply mission, a helicopter crew would come under enemy fire from the ground. This immediate attack caught to crew off guard. Bullets hit several empty jerry cans in the back of the helicopter, with some flying out from the impact. A soldier had been sitting on the jerry cans when the impacts blasted them away from underneath him, causing him to fall into the back of the helicopter. Fortunately, the soldier was uninjured, however LAC John Henson of the RAAF – sitting across from him – was hit by shrapnel in the leg. Luckily the wound was not fatal; Henson would be taken to the 8th Field Ambulance, where the shrapnel would be removed. This would make Henson the first RAAF serviceman to be wounded in the Vietnam War.

Just a week later – on 6 August 1967 – another incident would occur. With Operation Ballarat underway south west of Nui Dat, 7 RAR were sent in on the offensive carrying five days worth of rations. While the initial strength and stealthiness of the Australian forces caught the enemy off guard, this quickly escalated into a vicious battle – the Battle of Suoi Chau Pha – with two Australian and two Viet Cong platoons entering close combat. Several Australian soldiers were hit, and the increasing number of wounded meant that medevac was required.

Six RAAF Iroquis of 9 Squadron were called in, and began a picking up wounded from the rear of the combat zone. Due to the uncertainty of enemy positions, and the tough landing zones in the jungle, the 9 Squadron crews began winching up the wounded in ‘hot extractions’. Enemy fire was heavy, and it was reported that several helicopters were directly hit by small arms fire. Nevertheless, the mission continued. A while later, as the winch was being lowered, the helicopter of Squadron Leader Jim Cox came under fire. Bullets impacted the outside, however a single bullet entered through the bottom of the helicopter and pierced the boot of Jim Cox. Now wounded and struggling to fly, the helicopters controls were handed off to P/O Peter Davidson, who took the crew back to base. Jim Cox’s injury would mark the first time an RAAF pilot was wounded in Vietnam.

The month of August 1967 saw several other chaotic incidents for 9 Squadron as Viet Cong presence increased in South Vietnam. On the 13th, an SAS patrol fell under enemy fire in Xuyen Moc, and a helicopter flown by P/O Michael Haxwell was sent out to retrieve them. Touching down, the SAS patrol scrambled aboard as large bursts of gunfire began hitting the helicopter. Haxwell attempted a downwind takeoff and managed to get out of the immediate area of threat, however it became evident that the Huey was heavily damaged. With major problems occurring, Haxwell realised the safest bet was to land in Xuyen Moc, and the crew eventually landed safely. Later, the Huey would be retrieved by a US Chinook and taken back to Vung Tau for repairs.

Several days later, on the 20th, another emergency SAS extraction was requested, however this time the patrol was completely pinned down and unable to navigate to an opening in the jungle. A helicopter crew flew out and began a ‘hot extraction’ using the winch over the thick jungle. LAC P. Covington began returning fire with his machine gun, as suppression from both sides made the risky extraction even more dangerous for those being winched up. Luckily, several US gunships began suppressing the Viet Cong positions using rockets and machine guns. Due to the danger close suppressing fire, Covington was supposedly hit by shrapnel from a US-fired rocket. Nevertheless, the extraction was accomplished.

Despite these first dangerous encounters with the Viet Cong, 9 Squadron and the RAAF in Vietnam would only continue to become more daring in their operations to rescue soldiers in the field. This was reflected later on October 3, 1967, when RAAF Corporal John ‘Snow’ Coughlan helped rescue several injured and burning American crewman from a downed Huey gunship in the jungles north of Nui Dat. The downed Huey was at risk of exploding due to the rockets and other explosives kept on the gunship, however Coughlan and others were willing to put themselves within fatal distance of the rocket pods in order to pull out the wounded.

While other casualties would be suffered throughout the conflict, 9 Squadron and the RAAF more broadly would distinguish themselves with their ability to adapt to threats and overcome them without suffering major losses. The small size of 9 Squadron allowed for a precision approach to missions which not only made them fast and effective, but reduced the danger many other Iroquis squadrons would experience in the Vietnam War. 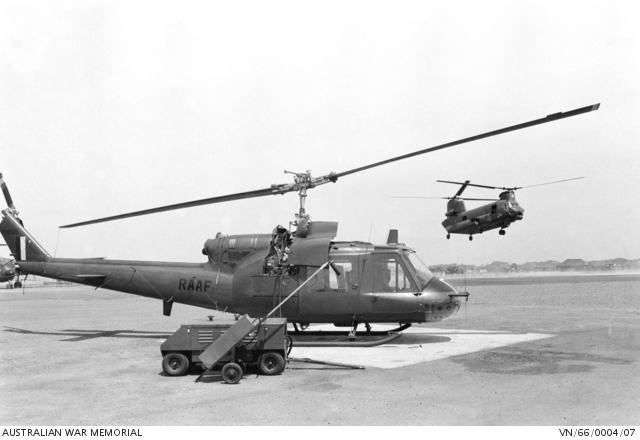