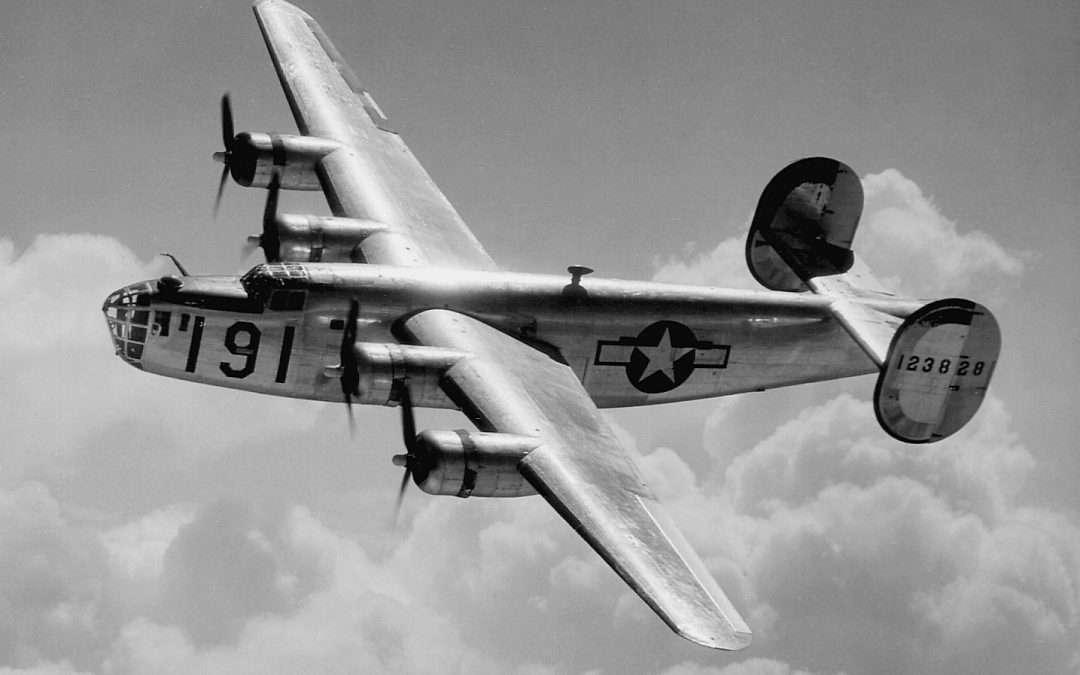 The Consolidated B-24 Liberator is an American heavy bomber, designed by Consolidated Aircraft of San Diego, California. It was known within the company as the Model 32, and some initial production aircraft were laid down as export models designated as various LB-30s, in the Land Bomber design category.

At its inception, the B-24 was a modern design featuring a highly efficient shoulder-mounted, high aspect ratio Davis wing. The wing gave the Liberator a high cruise speed, long range and the ability to carry a heavy bomb load. Early RAF Liberators were the first aircraft to cross the Atlantic Ocean as a matter of routine. In comparison with its contemporaries, the B-24 was relatively difficult to fly and had poor low-speed performance; it also had a lower ceiling and was less robust than the Boeing B-17 Flying Fortress. While aircrews tended to prefer the B-17, General Staff favored the B-24 and procured it in huge numbers for a wide variety of roles. At approximately 18,500 units – including 8,685 manufactured by Ford Motor Company – it holds records as the world’s most produced bomber, heavy bomber, multi-engine aircraft, and American military aircraft in history.

The B-24 was used extensively in World War II. It served in every branch of the American armed forces as well as several Allied air forces and navies. It saw use in every theater of operations. Along with the B-17, the B-24 was the mainstay of the US strategic bombing campaign in the Western European theater. Due to its range, it proved useful in bombing operations in the Pacific, including the bombing of Japan. Long-range anti-submarine Liberators played an instrumental role in closing the Mid-Atlantic gap in the Battle of the Atlantic. The C-87 transport derivative served as a longer range, higher capacity counterpart to the Douglas C-47 Skytrain.

By the end of World War II, the technological breakthroughs of the Boeing B-29 Superfortress and other modern types had surpassed the bombers that served from the start of the war. The B-24 was rapidly phased out of U.S. service, although the PB4Y-2 Privateer maritime patrol derivative carried on in service with the U.S. Navy in the Korean War.