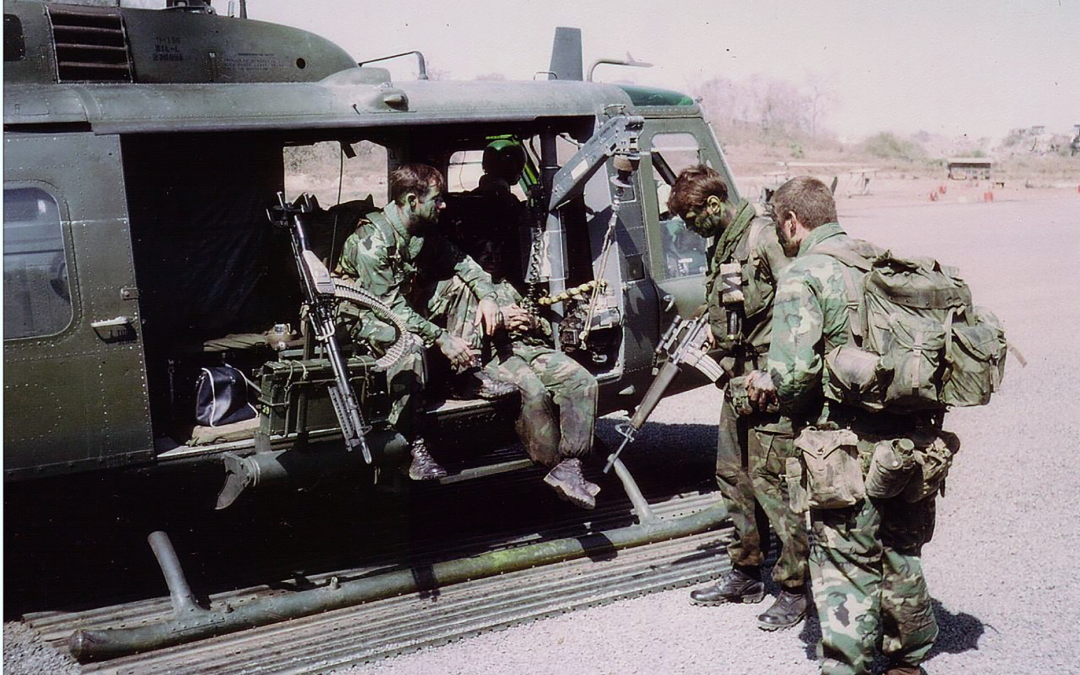 This is an extract from Episode 3, Phantoms of The Jungle, a documentary produced around 2014 about the ASASR in South Vietnam. The extract record what past CO No. 9 SQN RAAF SVN, WGCDR John Paule DSO AFC, and past SAS members stated: 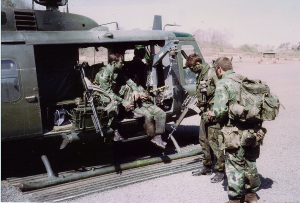 Prior to their PI awaiting start-up circa late 1970 is a SAS Patrol at a No. 9 SQN RAAF SVN ‘Huey’. Source: Peter Johnson.

SAS
Most SAS patrols depended on the helicopters of 9 Squadron, Royal Australian Air Force. At first these helicopters were unarmed. This made SAS operations very risky. So the pilots modified their own gunships, but without first asking their masters in Canberra.

John Paule
Had we asked permission to develop a gunship the answer would have come back, “No, you can’t because the aircraft is incapable of being a gunship.” In fact the U.S. Army told us that our aircraft was incapable of being a gunship. But after nine months of creative effort and scavenging from the Americans – success.
9 Squadron had its own gunships, the Bushrangers – with rocket pods, (pause) multi-barrelled mini-guns, (pause) and M-60 machine guns on each side.
To insert a SAS patrol we would use five aircraft. The SAS patrol would be on one aircraft, there would be a command aircraft, there would be a spare aircraft and there would be a pair of gunships.

Holt McMinn
The troops boarding the helicopter and they would go on a helicopter called a slick ship. The helicopter would just fall out of the sky to tree top level. You would fly at treetop level, sometimes just hitting the tops of the trees and ripping your greens if you were sitting in the door with your feet hanging out. It was the wildest ride of your life. The hair stood up on the back of your neck. It was better than anything that you would find at Wonderworld or Disneyland or anywhere else — what a ride! Just fantastic. 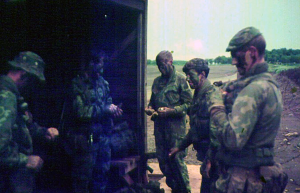 Ian Rasmussen
To move out onto those skids and just run into the bush and you were running into a barrier. Here we were, being dropped off in the middle of nowhere in enemy territory and running into a scrub line.

John Paule
Our relationship with the SAS was very close….if you pulled them out during a hot extraction, they wouldn’t come on board the aircraft one at a time, sit down and roll a smoke and do up their seat belts. They would throw themselves on the floor of the aircraft, poke their guns at the side and add to the suppressive fire that the aircraft might be laying down itself.

Paddy Bacskai
So I jumped behind his twin M-60s and looking down I could still see my mates back to back by this time…I shot a nice arc of fire around them – very nice – I felt that it was good covering fire. Anyhow, the crew chief sort of came over me and he said to me, “Did you get any bastard?” And I said, “Well, I don’t know because I mainly shot cover for my mates down below.” And he says, “Because you used all my bullets!” [laughs]

John Coleman
But the 9 Squadron, they were a fantastic mob of people. When we prayed at night, we prayed to them first, then God, because we reckoned they did more good for us. [Laughs] Everyone was religious! 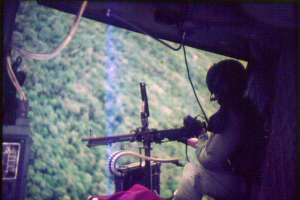 In the hover adjacent the hoist aircraft ALBATROSS 02 is ALBATROSS 03 showing the RHS crewman covering the SAS Patrol hoist extraction with his 7.62 mm M60 door gun.

Chris Roberts
On one patrol in May 1969, south west of the Courtenay rubber, my patrol was surrounded. We had enemy that I could actually see to the north, south and to the west, and I was pretty sure that they were in the thick country to the east of us. We waited there for about three hours and finally, as the sun was going down, I got a call that the Bushranger was on their way in – that was the Australian light fire team. I asked him to put rockets 20 m to the north and 20 m to the south of us…After the rockets came in a lone helicopter came across the top of the trees and dropped four ropes to us. Both door gunners were firing, we were firing. We hooked onto the ropes and we came out and there was tracer absolutely going everywhere. We could see the enemy firing at us as we were pulled up through the trees. And I’ve got to say that my patrol owes its life to that very gallant pilot in 9 Squadron.
9 Squadron and Lady Luck saved many SAS teams from certain death. 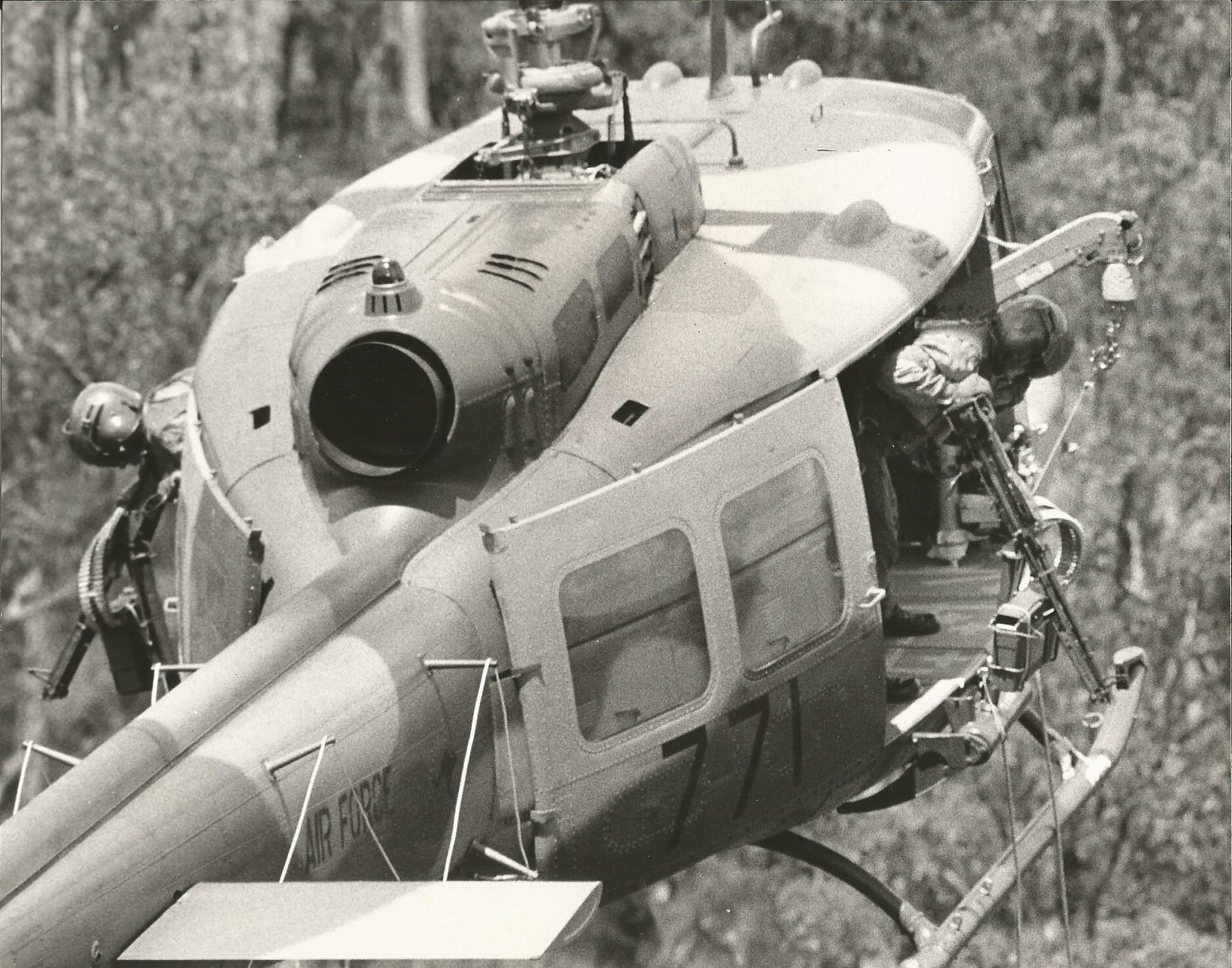 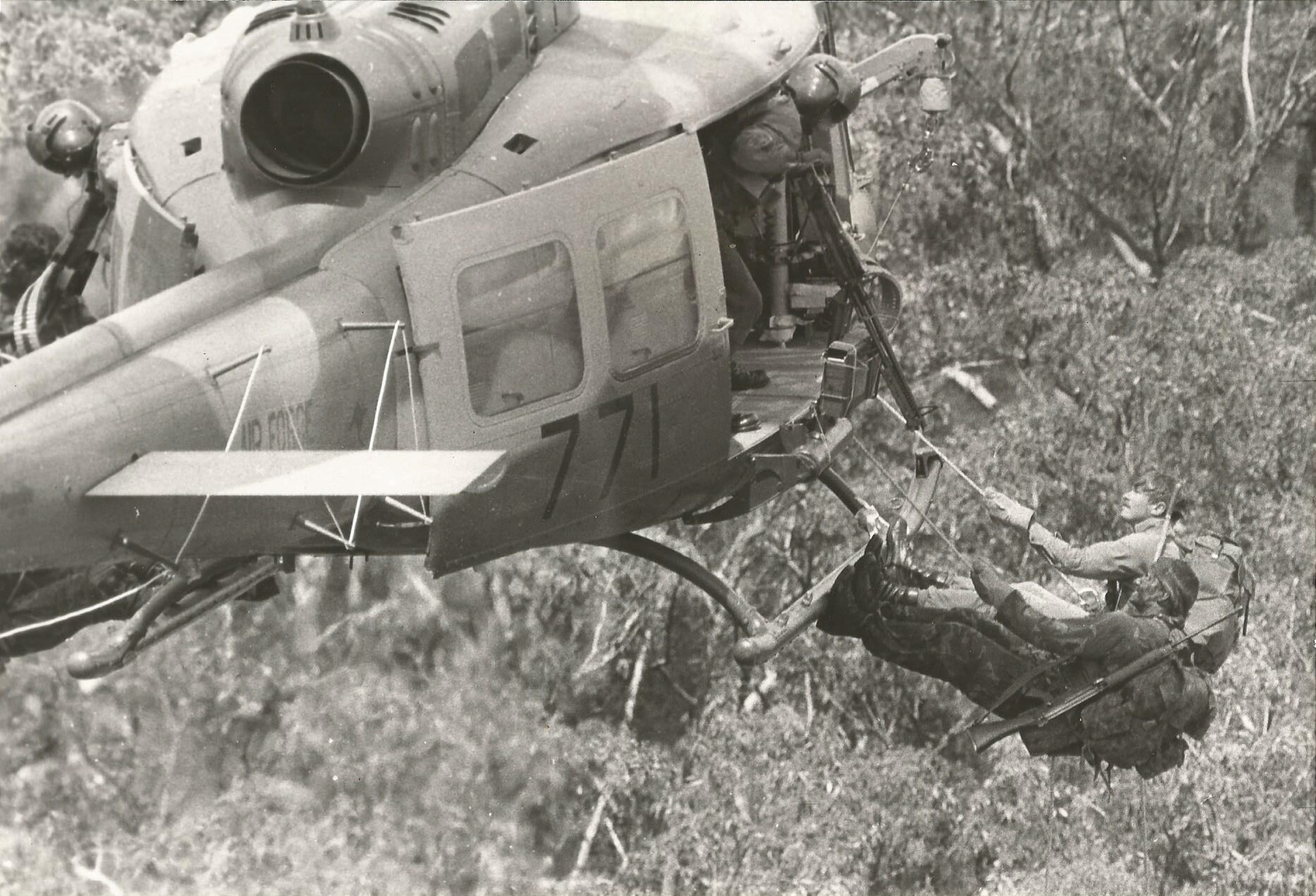