A brief History of 9 SQUADRON

No. 9 Squadron RAAF and its precursor Units were on the RAAF Order of Battle during three specific periods or ‘eras’.

Part of the first era was 1925 until 1936 (the HMAS Albatross period). The precursor Unit was No.101 Fleet Co-operation Squadron RAAF. During April 1926, six Seagull Mk III amphibians arrived by ship (A9-1 to A9-6) and were erected and test flown at RAAF Point Cook then allotted to 101 FC Flight which relocated to Bowen, QLD in August 1926. On 23 February 1928, RAN seaplane carrier HMAS ALBATROSS was launched at Cockatoo Island Dockyard, Sydney and commissioned at Sydney on 29 January 1939. No.101 FC Flight RAAF (personnel and stores) that had recently returned from Bowen, QLD to Point Cook, embarked on HMAS ALBATROSS on Port Phillip Bay on 21 February 1929.

Note. The ALBATROSS’ RAN and RAAF very close association generated production of variations of the flying Unit’s crest (or patch) that symbolically embodied the Naval crown and the albatross seabird.

At the 1939 outbreak of WW II when flying from many RAN cruisers, No. 9 FC Squadron RAAF Detachments commenced patrols against the Germans in the Mediterranean and the Atlantic, Pacific and Indian Oceans. 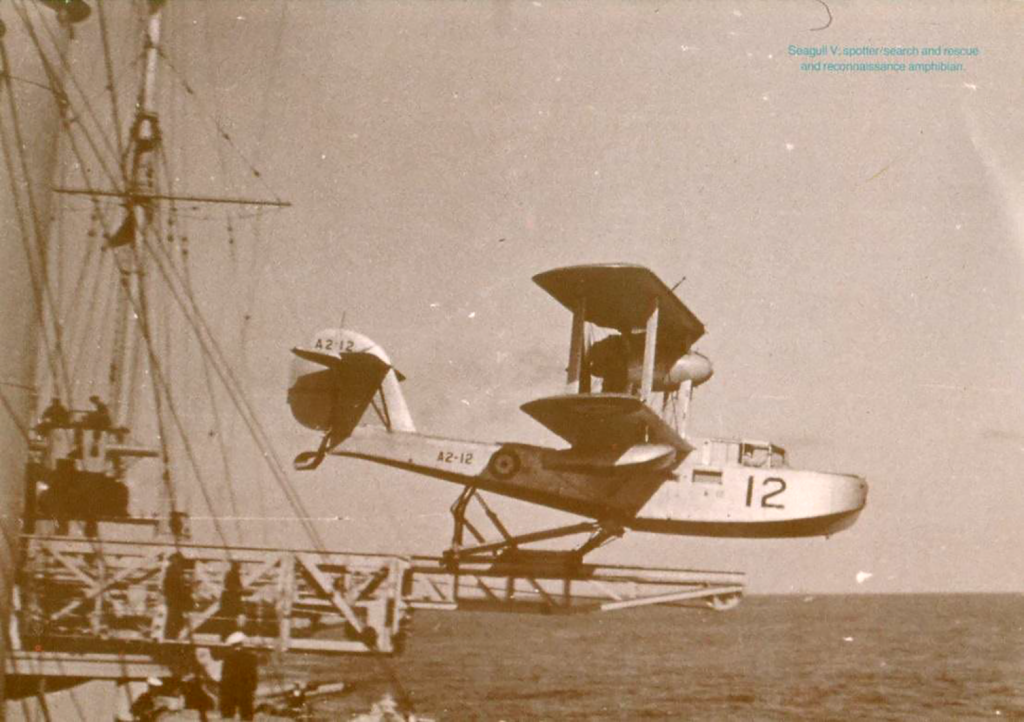 No. 9 FC Squadron RAAF Detachment flying from a RAN cruiser

This conduct continued until 1942 in these regions and in actions as shown on the Squadron Battle Honours and reflects the sinking of a number of RAN warships with large losses of Australian servicemen. During the period January 1943 until November 1944, the Squadron was located at Bowen, QLD and conducted reconnaissance operations of the Far North Queensland region.

The second era was the period 1962 until 1971. No 9 Squadron RAAF was equiped with Iroquois helicopters and committed to the Vietnam war for over 5 years. The advance party arrived at Vung Tau on 3 May 1966, followed by the main part of the Squadron on 12 June 1966. Variously, RAN and RNZAF pilots were posted to fly with No. 9 Squadron RAAF in SVN.

Progressively during December 1971, the Squadron redeployed from Vung Tau, SVN to its new home at RAAF Base Amberley in South East Queensland about 50 km from the capital city of Brisbane. Air and sea transport was used including one HMAS SYDNEY voyage.

After maintenance and re-configuration, the choppers were flown off HMAS SYDNEY to Caloundra (north of Brisbane) where they landed, shut-down and re-grouped before flying south to RAAF Base Amberley.

The third era was 1972 until 1989. For 17 years following the Squadron’s arrival at RAAF Base Amberley and throughout Australia and neighbouring countries, it continued to provide utility rotary-wing support to the Australian Army, and SAR and national disaster/emergency responses for civilian communities. From July 1976, the Squadron also contributed aircraft and aircrew to the Australian helicopter detachment (four Iroquois) which formed part of the Multinational Force and Observers in the Sinai Peninsula of Egypt. 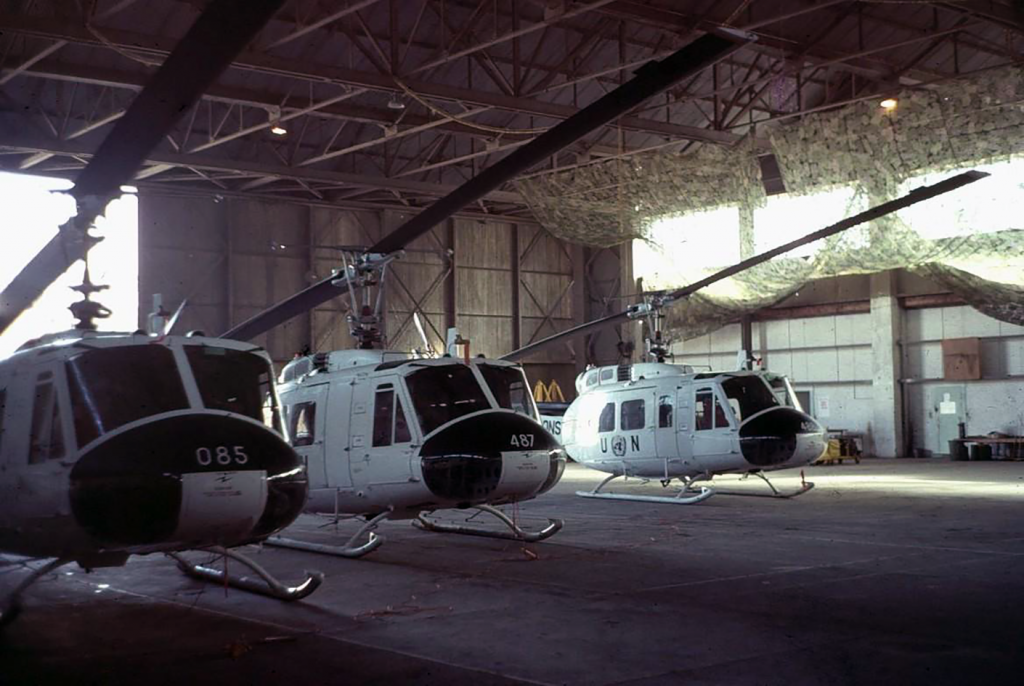 Australian detachment for the Multinational Force and Observers in the Sinai Peninsula of Egypt.

In 1986 the Australian Government decided to transfer the RAAF battlefield helicopter capability to the Australian Army. During February 1988, No. 9 Squadron RAAF began to be re-equipped with Sikorsky S-70A Black Hawk helicopters.

Upon converting to the new aircraft, the Squadron moved to Townsville where it was disbanded on 14 February 1989. The No. 9 Squadron RAAF’s aircrew and aircraft were then used to form ‘A’ Squadron of the Australian Army’s 5th Aviation Regiment as part of the Australian Government’s new policy of placing battlefield helicopters under Army command.

Transfer of RAAF Battlefield Helicopters to the Australian Army
In November 1986, the Chiefs of Staff Committee (COSC) decided to transfer the RAAF Battlefield Helicopters from the RAAF to the Australian Army. All members of the RAAF helicopter community were bitterly disappointed with the decision. A Transfer Plan was developed in Canberra to implement the decision which envisaged that the transfer would commence with 9 SQN at the beginning of 1989. The transfer was complicated by the initial requirement to introduce the Black Hawk to service with 9 SQN and the need to relocate the Black Hawks to new purpose built facilities at RAAF Base Townsville.

The first Army members arrived at 9 SQN in mid-1987 and the first Black Hawk arrived in February 1988. By the end of the year six Black Hawks had been delivered and the Squadron participated successfully in Exercise SWIFT EAGLE 88. Squadron members were very happy with the impressive performance of the new helicopter.

In November 1988 the Squadron conducted farewell ‘end of an era’ functions and ceremonies at Amberley. The Squadron Colours were ‘laid up’ in a poignant and moving Service at the Air Force Chapel at Point Cook. Six No. 9 SQN Black Hawks departed Amberley and headed north on 7 December 1988. After an overnight stay at Rockhampton, they arrived at Townsville in close formation for to fly over the city to mark their arrival. On 14 February 1989 the Squadron was transferred to the Army.

Although the transfer was most challenging for all concerned, Squadron members conducted themselves with great professionalism and teamwork to successfully deliver the transfer of a new capability to the Australian Army.

Redeployment of RAAF Iroquois and Black Hawk Helicopter Personnel
In 1991, Chief of the Air Staff, AM Ray Funnell AC redeployed the 300 or so ex No. 9 Squadron RAAF personnel from 5AVNREGT to Air Force Units. 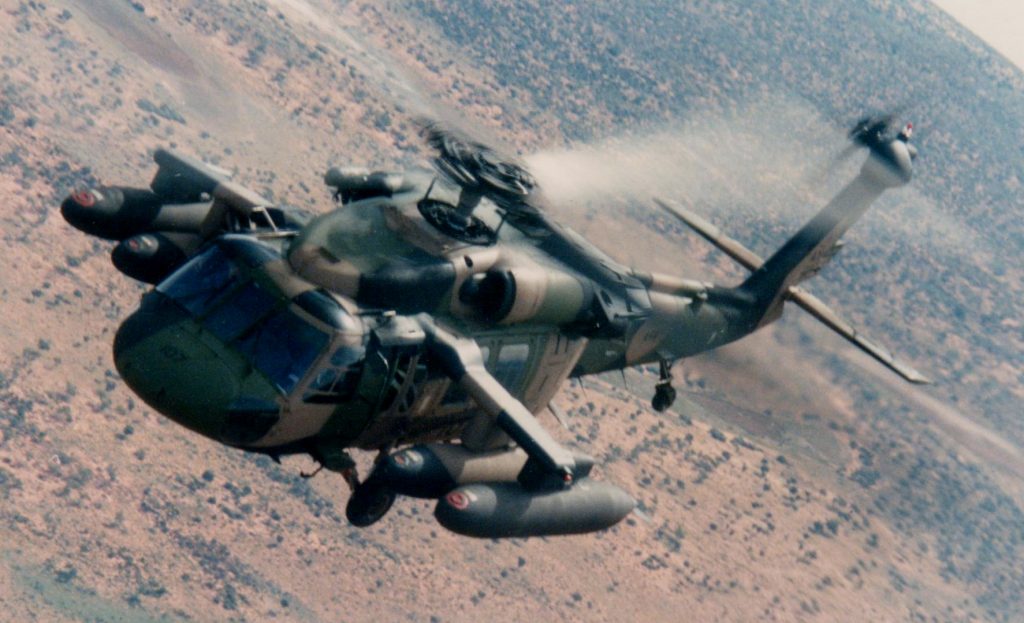