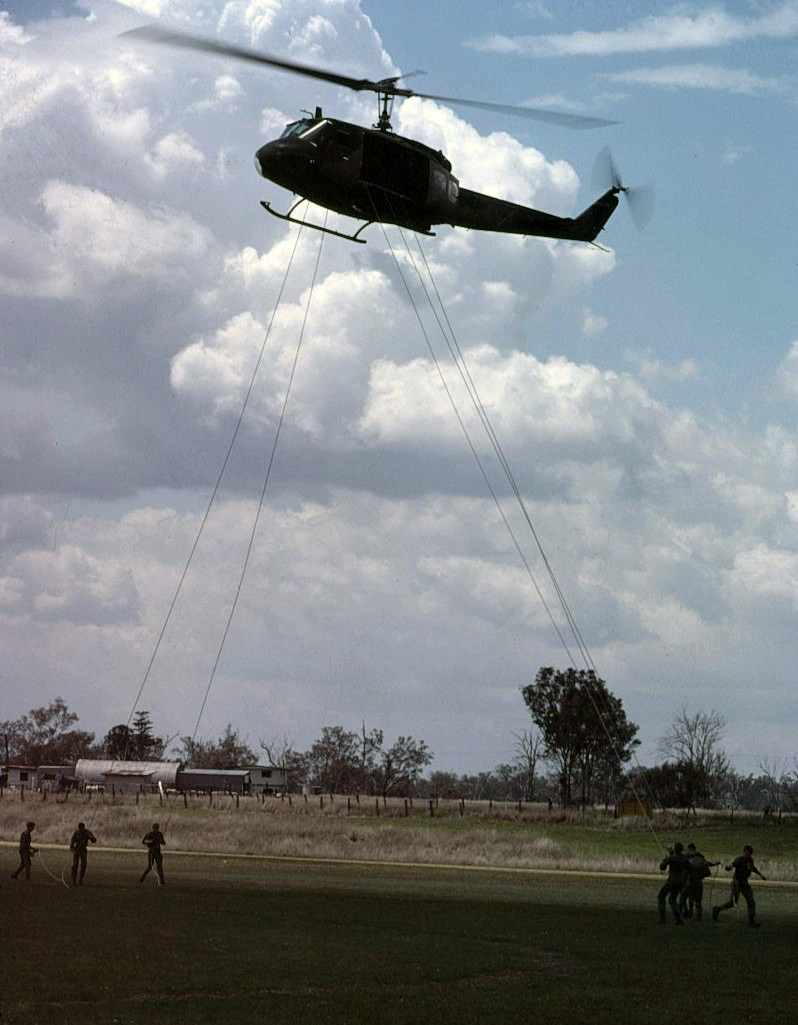 No. 9 Squadron’s Return to Australia

In late December 1971, No 9 Squadron departed Vung Tau, SVN. Yet again, HMAS SYDNEY embarked the No 9 Squadron helicopters, crew and maintenance complement. She sailed via Townsville (short stop-over) to Caloundra (near Brisbane) whence the helicopters flew off HMAS SYDNEY in formation and arrived at their new home, RAAF Base Amberley. Most of the squadron left Vung Tau on 17 December 1971 and flew to Townsville, joined with the HMAS SYDNEY complement and 4 RAR personnel and marched through the city.

No. 9 RAAF Squadron was now ‘home’ after 5 1/2 years of what was, in all aspects of a squadron’s conduct and performance, an ‘exceptional’ period of overseas combat Helicopter Support Operations in South Vietnam.

Significant work was undertaken to ensure the operational effectiveness of the RAAF Helicopter Capability post the SVN commitment period. For example, the ‘Shifting Sands’ Exercises throughout 198 0 to 1982 played an important part in all of this and almost every aspect of No. 9 Squadron’s methodology was impacted in some way; administration, maintenance, deployability, supply of fuels and spare parts, aircraft modifications and engineering, general support equipment (GSE) design and manufacture and aircrew and ground crew training. The following statement used by a staff college lecturer seemed particularly apt: ‘(successful) Military operations are only feasible with effective logistic support’. (sic)

The introduction of the Black Hawk helicopter into the ADF via No. 9 Squadron RAAF was obviously ‘in this mix’ as was the forthcoming increased use of night vision goggles/devices (NVG) by aircrew dictated by changing AS Army conduct.

‘Settling – in’ at RAAF Base Amberley, Queensland and the issues related to numerous and ongoing deployments away from ‘home base’ resulting in the No. 9 Squadron nickname, ‘The Nomadic Ninth’.

During night operations NW of Port Augusta SA, Iroquois A2-770 impacted high terrain. All onboard including the squadron’s Commanding Officer WGCDR Peter Mahood were perished.

RAAF Headquarters Operational Command (HQOC) established the Helicopter Operations element of its Air Operations Centre. The aim was to provide improve operational effectiveness through centralised, resource management, tasking and higher quality support for ADF single service, Joint and Combined activities and training and, for RAAF rotary-wing support under Defence Aid to the Civil Power (DEFACP) and Defence Aid to the Civil Community (DEFACC) auspices to respond effectively to support requests during times of national and state emergencies and contingencies.

For all aircrew and maintenance support personnel of the RAAF Iroquois helicopter capability (No. 5 SQN at Fairbairn, No. 9 SQN at Amberley and later, No. 35 SQN at Townsville), Standardised (helicopter type) Operational Procedures (SOP) and External Load Rigging and Lashing Manuals were introduced. Many successful operational and asset management benefits were derived from this especially when mounting Iroquois helicopter operations to support the large scale ADF and Combined exercises.

A government/Joint Chiefs of Staff decision initiated a transfer of ‘Battlefield’ Helicopters to Army. Air Marshal J.W. (Jake) Newham AO was Chief of Air Staff, RAAF at this time.

Ceremonial Review to Mark the Disbandment of No. 9 Squadron, conducted at RAAF Base Amberley (Sadly that night, there was suicide by an ex No. 9 Squadron Vietnam helicopter gunner). 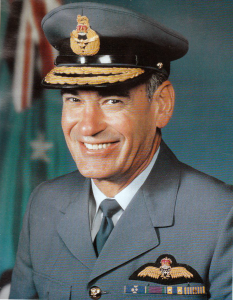 Progressively throughout 1988, No. 9 Squadron re-located to Townsville to be incorporated in the 5th Army Aviation Regiment as part of the Transfer of ‘Battlefield’ Helicopters to Army.

Note. No. 5 Squadron provided helicopter-related air and ground training and contributed to the RAAF Iroquois Rotary Wing Capability until squadron disbandment at RAAF Base Fairbairn on 9 December 1989. WGCDR Geoff Farrell was Commanding Officer No 5 Squadron at disbandment.

No. 9 Squadron disbanded and the transfer of its aircraft, personnel and equipment to the 5th Aviation Regiment (5AVNREGT) at Townsville, FNQ took place.

Chief of the Air Staff, AM Ray Funnell AO, redeployed the ex No. 9 Squadron personnel from 5AVNREGT to Air Force units. 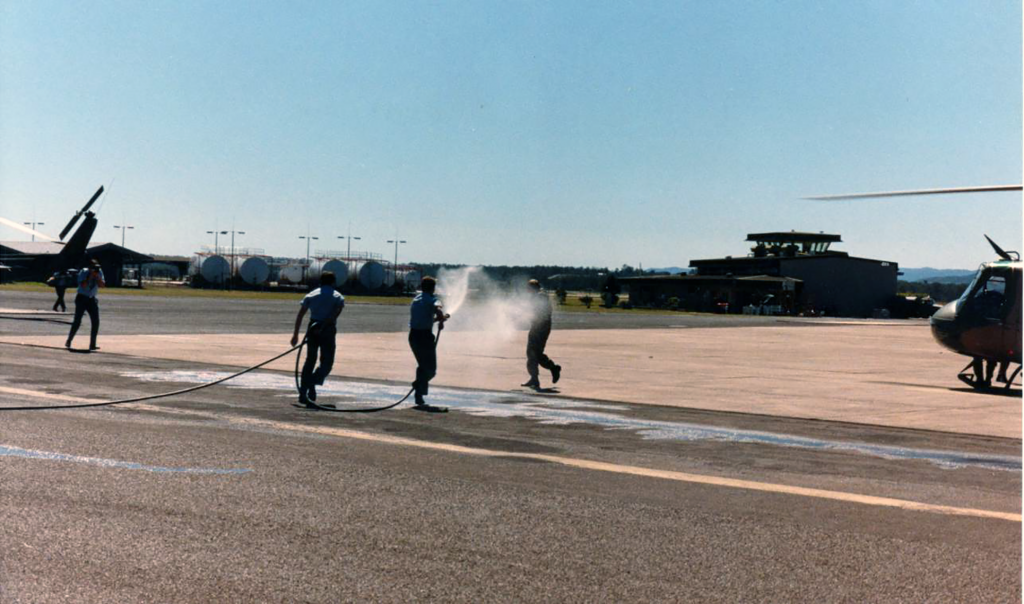 WGCDR Peter Hales was CO No. 9 Squadron RAAF from December 1982 until December 1984 and as shown here, the airmen gave him their ‘traditional departure gift’, a ‘hosing down’.