The Australian Air Force was created by Government on 31 March 1921, assuming the prefix of ‘Royal’ a few months later. Before 1921 the Australian Flying Corps of the Army was the main proponent of military aviation in Australia, with considerable initiative shown by the RAN in operating aircraft from warships. This initiative faltered in 1923, but some experience was gained using aircraft to support hydrographic survey of the Great Barrier Reef off the far north coast of Queensland (FNQ).

Warships and Seaplanes. In 1925, the Government opted to build a seaplane carrier for the Navy and ordered 6 Seagull Mk. III aircraft to equip the vessel.

No. 101 Fleet Co-operation Flight RAAF (101 FC FLT) was formed at Point Cook, VIC on 01 July 1925 to operate these aircraft when delivered in 1926. Three aircraft were deployed to Bowen, QLD in late August 1926 and began land-based operations supporting the Great Barrier Reef Survey.

101 FC FLT operated from ALBATROSS – with some time at RAAF Base Richmond NSW – until the 26 April 1933 date when HMAS ALBATROSS was ‘paid off’ into reserve due to RAN cruisers having developed a seaplane operating capability.
The RAAF ordered 24 Seagull Mk. V aircraft in 1934 to perform fleet co-operation and other roles, these aircraft having a metal hull and were strengthened for catapult launching.

No. 5 Fleet Co-operation Squadron RAAF (5 FC SQN) was formed from 101 FLT at Richmond, NSW on 23 April 1936 and continued to operate Seagull Mk. 5 aircraft until retitled No. 9 Fleet Co-operation Squadron RAAF (9 FC SQN) on 01 January 1939. 9 FC SQN moved from Richmond to Rathmines, NSW at end of 1939 and then relocated to Bowen airfield with 12 aircraft in January 1943, continuing to operate aircraft detachments on Navy cruisers and conducting anti-submarine patrols plus search and rescue duties around the Great Barrier Reef. 9 FC SQN redeployed to Rathmines at end of 1944 for disbandment, due to the RAN terminating seaplane operations from its remaining cruisers.

No. 9 Fleet Co-operation Squadron RAAF elements were involved in many historic naval battles during WW II, losing personnel and aircraft during military actions that resulted in the sinking of HMAS SYDNEY II, HMAS PERTH and HMAS CANBERRA.

Meanwhile, around mid-1942, upgrading began of the pre-WW2 101FLT rudimentary amphibian aircraft facilities on the Bowen foreshore to create a Flying Boat Base to host Nos. 11 and 20 Squadrons (Catalina aircraft) plus No. 1 Flying Boat Maintenance Unit. But both 11SQN and 20SQN were disbanded early in 1946 as RAAF involvement at Bowen began winding down.

So in those few short years a seaplane capability had been established that included operations from RAN Cruisers and then this progressively ceased just prior to and within the year of the end of World War II (Disbanded at Rathmines, NSW on 31 December 1944). Hence, that was the introduction for No. 9 Squadron RAAF primarily through one precursor Unit, No. 9 Fleet Co-operation Squadron RAAF.

The history of No. 9 Squadron RAAF and its precursor Units can be clearly and successfully documented in three distinct ‘eras’ of the overall Squadrons’ operational ‘lives’. Accordingly, the three ‘eras’ arrangement defines much of the structure for this history and these are detailed here and presented more generally throughout the No. 9 Squadron parts of the document.

1925 until 1944 (first era). This included the operational period(s) of No. 101 Fleet Co-operation Flight RAAF, Nos. 5 and 9 Fleet Co-operation Squadrons RAAF and the operational relationship with HMAS ALBATROSS during 1923 – 1933 (Seagull Mk. III and V aircraft) and, No. 9 FC Squadron operations from numerous RN, RAN and RNZN warships (Seagull Mk. V and Walrus aircraft).
1961 until eoy 1971 (second era). The No. 9 Squadron RAAF and No. 5 Squadron RAAF operational and training period that employed the Bell Iroquois Utility helicopter, generally called the ‘Huey’.

Clearly, there were striking aviation and technical differences during the three eras and situations included:

There were immense challenges to efficient and safe conduct for the No. 9 Squadron and associated personnel who flew, maintained and supported the air operations.

During the first era, challenges included severe maritime weather and environments, the difficult and dangerous ship-board activity itself and the available materials and components used in early versions of amphibian and seaplane aircraft such as canvas, wood and ‘goop’. Also, there were limitations in communication and other aircraft and personal equipments and, the actual observations and reporting of enemy shipping and engagement.

At the time of its allotment to combat operations in Vietnam War in June 1966, during the last five years of the second era, No. 9 Squadron RAAF was ill-equipped for the task at hand as recorded in the historical facts. Initially, operating eight UH-1B Iroquois helicopters, some daunting challenges were the SE Asian tropical weather with the monsoonal rain storms, high temperatures and humidity, flying at maximum all-up-weight (AUW) or with an authorisation to conduct flight above the Huey’s OEM designated AUW and, conducting high AUW missions in the bush and jungle often into and out of small landing zones (LZ) or landing sites (LS). These were added to by the limitation of one on-board radio navigation aid and the requirement for night operations with medical evacuations (DUSTOFF) of Australian, New Zealand, Vietnamese and US forces. Of significance was the high aircraft flying hour rate of effort (ROE) on a daily basis that generated exceptional maintenance and logistics demands on the squadron engineers, technical and non-technical tradesmen. Then, of course, there were the close encounters with the enemy when our Australian (AS) or New Zealand (NZ) soldiers were in contact with the enemy and sought helicopter fire support, re-supply of ammunition, DUSTOFF, or all three.

The third era for No. 9 Squadron commenced at RAAF Base Amberley, QLD in late 1971 with a small advance party thence the arrival of the aircraft, equipment and some personnel from Vietnam in late December aboard HMAS SYDNEY. The third era officially concluded on the tarmac at the RAAF Base in Townsville on 14 February 1989 when No. 9 Squadron RAAF was disbanded and transferred its aircraft, personnel and equipment to the ARMY 5th Aviation Regiment, through ‘The Transfer of Battlefield Helicopters to Army’ arrangements.

The Details of Operations (A51) for No. 9 Squadron RAAF’s Second Era commitment in South Vietnam were most comprehensive with eleven columns on the page headed:
DATE
AIRCRAFT #
CREW
SORTIES
FLY TIME
RNDS FIRED
AREA-TYPE OF OPERATION
PAX
MEDEVACS
FREIGHT 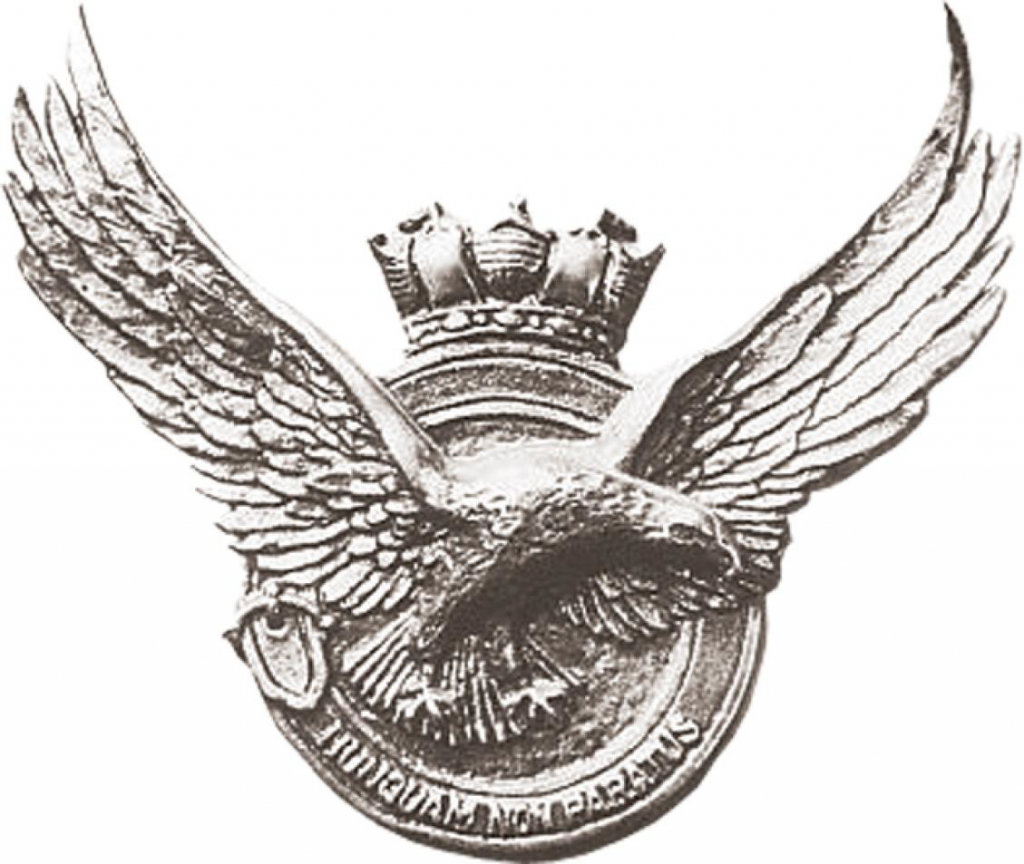 NUNQUAM NON PARATUS: Never unprepared. The Naval Crown within the crest reflected the strong association of No. 9 Squadron RAAF with the Navy

Navies, Armies and Air Forces are essentially mother organisations and military personnel usually relate moreso to units with which they served. Historically, symbols of various forms have been adopted as a means of identifying units in battle and these usually become revered icons that instil Unit spirit.

Development of the No. 9 Squadron Crest

With our specific history, at some early stage No. 101 Flight (101FLT) created its own Crest (below) but this was never accorded official recognition by the Monarch of the time.

This magnificent bird breeds mainly in the Falklands Islands south of Argentina, and wanders the southern oceans up to near or about sub-tropical latitudes. It mates for life and always returns to the same nest thus the head of this great bird on the Crest denotes loyalty.
101FLT became No. 5 Squadron (5SQN) in 1936 and a formal Unit Crest was designed, this becoming the Official Crest for No. 9 Squadron (9SQN) soon after the Unit number was changed in 1939.

The ALBATROSS’ RAN and RAAF association generated variations of the flying Unit’s crest (or patch) that symbolically embodied the Naval crown and the albatross seabird. This symbology was the centrepiece for all subsequent RAAF Fleet Co-operation Units until disbandment of No. 9 FC SQN RAAF in December 1944. The symbology ‘came alive’ again in 1962 when No. 9 Squadron RAAF was reformed and awarded a close copy of the original unit crest in 1963 shown here.

VIDEMUS NEC VIDEMUR: We see without being seen

The ship’s bell from HMAS ALBATROSS (see image on the following page) was presented to 101 Flight by Captain C. J. Pope, RAN when the vessel was paid off into the reserve in 1933. Following a number of custodial RAAF units, it was presented to Royal Australian Naval Air Station HMAS Albatross in January 1950. The sacred bell, pictured below, is now an Australian Heritage Item and reposes in the Chapel at Nowra. The Chief of Navy has graciously approved its use in No. 9 Squadron Association commemorative proceedings. 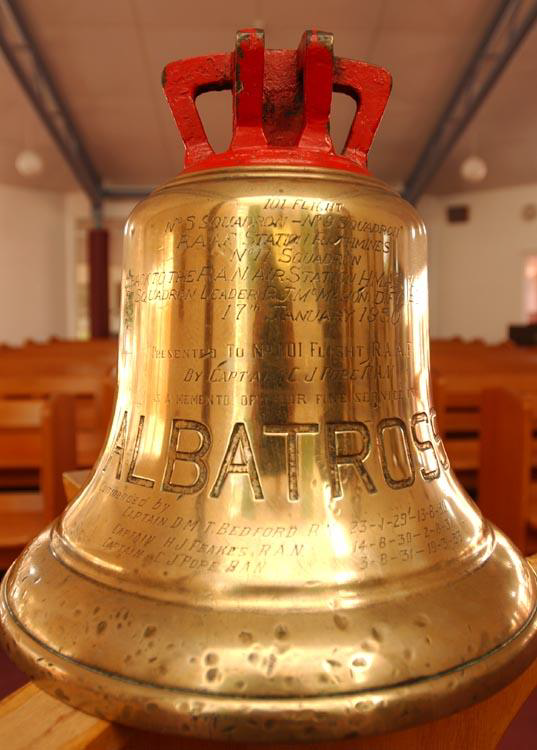 The ship’s bell from HMAS ALBATROSS used in No. 9 Squadron Association commemorative proceedings

The No. 9 SQUADRON STANDARD

Although lost in antiquity, it is known that the Assyrians, Egyptians, Greeks and Romans all had ensigns and standards that were revered symbols. Also, Standards have been used by British Forces for some centuries. Enshrined on the Standard are the battle honours recording the proud tradition of the Unit concerned and constituting a memorial to those whom have gone before, thus contributing to the Unit tradition.

RAAF Standards or Ensigns
Australian military Unit’s Battle Honours are reverently recorded on a Unit’s Standard. Royal Australian Air Force (RAAF) Operational Squadrons qualify for consideration of The Standard after 25 years of service or having earned the Sovereign’s appreciation for especially outstanding operations.

No. 9 Squadron RAAF – Squadron Standard
The Standard was presented by His Excellency the Governor of Queensland, AIRMSHL Sir Colin Hannah KCMG, KBE, CB, KStJ, during a Ceremony at RAAF Base Amberley, QLD on 21May 1975.

The Standard is a fringed and tasselled silken banner in Royal Air Force blue, mounted on a pike surmounted by a Golden Eagle. It has a decorative border of roses, thistles, sshamrocks, leeks and wattle.

In the centre is the Squadron Crest portraying an Albatross head encircled by the naval crown. The motto is VIDEMUS NEC VIDEMUR (to see and not be seen). White scrolls on each are inscribed with the battle honours of the Squadron. 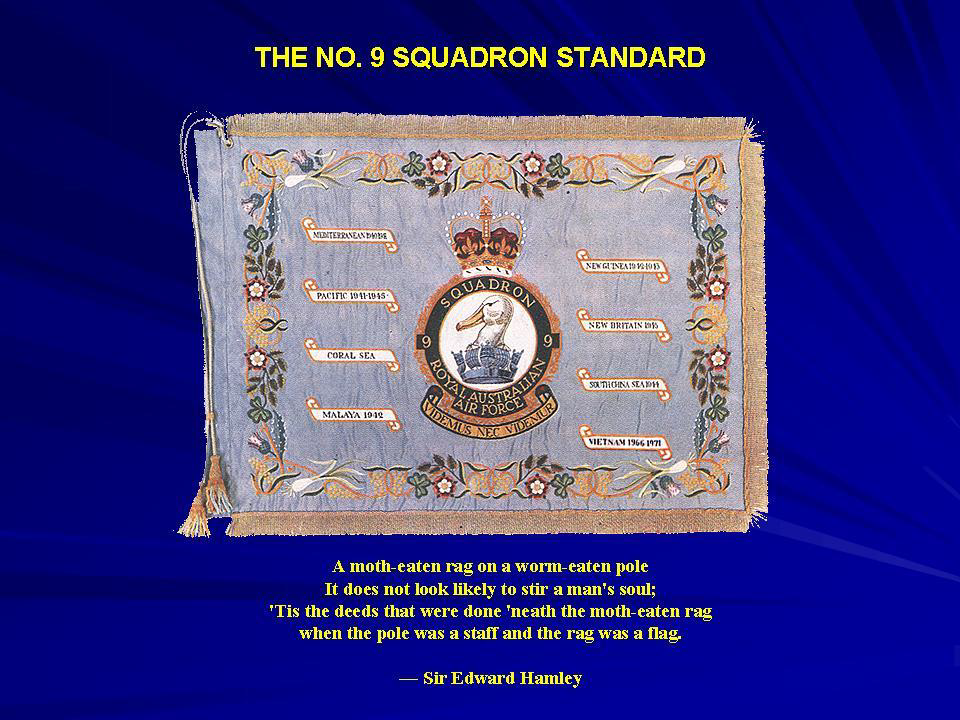 The No. 9 Squadron RAAF Standard presented by His Excellency the Governor of Queensland, AIRMSHL Sir Colin Hannah KCMG, KBE, CB, KStJ, during a Ceremony at RAAF Base Amberley, QLD on 21May 1975

Past No. 9 Squadron personnel and families would regard the Squadron Standard as the pre-eminent item of Squadron/Unit Symbology.
Additionally, there are 8 Battle Honours on the No. 9 Squadron Standard although the Unit participated in a number of actions embarked on warships that were accorded other Battle Honours not reflected on the Standard. Some of these actions involved the loss of aircraft and personnel.