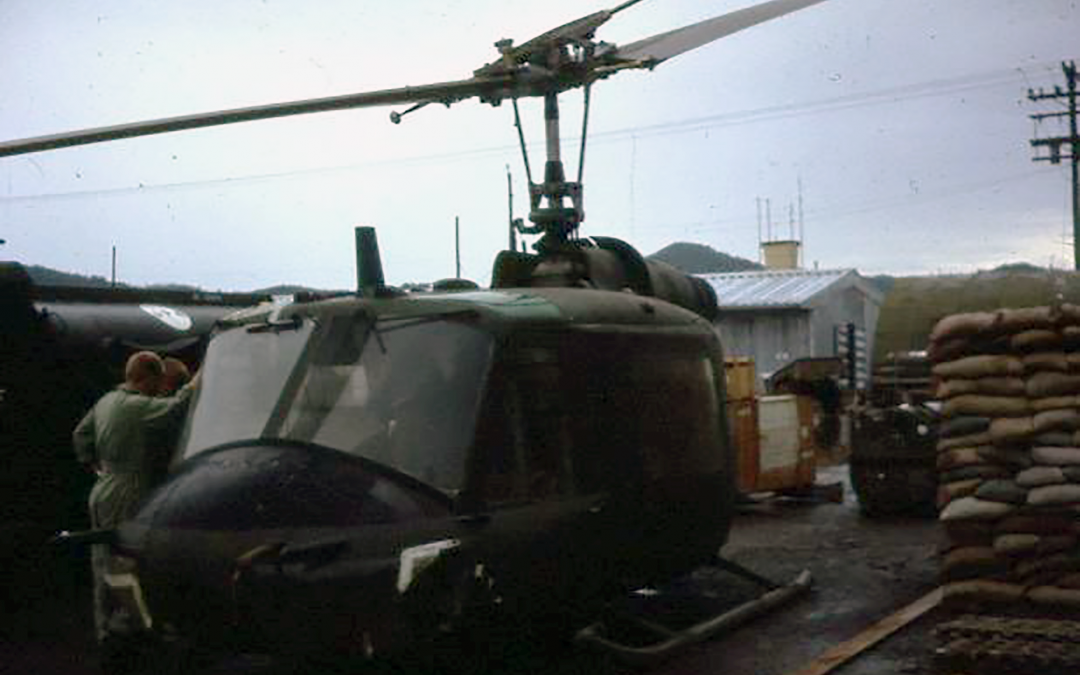 In April 1967, A2-1019 had an engine failure as result of enemy action and crash landed in South Vietnam and was later lifted out by a US Ch47 (Chinook) and returned to Vung Tau.

A2-1019 was considered to be a ‘write off’ and a replacement aircraft (UH-1D) was purchased from the US Army. About June 1967 another helicopter (A2-1024) was extensively damaged and written off. However, the tail boom of A2 -1024 was in a serviceable condition and retained as a spare.

About this time I decided that it was possible to rebuild one helicopter from the serviceable components of the two crashed aircraft together with some serviceable components salvageable from crashed US Army helicopters which had been placed in a locked compound near our operating area and for which I had access.At first the rebuilding was carried out on a part time basis (this started at the beginning of August 1967) but later the project was stepped up and carried on as a full time project even though at times parts from the hybrid machine were used to keep other 9 Sqn helicopters flying.

On September the 22nd 1967 the rebuild A2-1019 (it retained that number because the front fuselage had belonged to the original 1019 and that is the part on which the data plate is affixed on all UH-1 during manufacture).

It completed a successful test flight and was returned to the squadron inventory.

Although US Army operators were at first dubious of our ability to complete the task of rebuilding 1019 in the field and without sophisticated jigs and equipment, it is interesting to note that after the successful completion of our task the US Army embarked on a program of rebuilding their own crashed helicopters which previously had been stored in their Vung Tau compound (Graveyard).

Interestingly enough it was at this time that I was relieved of the key and denied further access to the compound by the US Army.

The rebuilding of A2-1019 reflects the ingenuity and technical skills of the squadron maintenance personnel. Not to be overlooked are the facts that firstly, there was a saving in the cost of purchasing a UH-1 from the US Army (at that time in the order of $330,000) since the rebuilt 1019 although replaced by another purchased from the US Army, then replaced another of 9 Sqn’s aircraft which was subsequently written off; and secondly, the hybrid A2-1019 is still in a serviceable flying condition at the time of writing.

I consider that because of the history of this helicopter it should be considered as the most worthy contender to be placed in the Australian War Memorial. 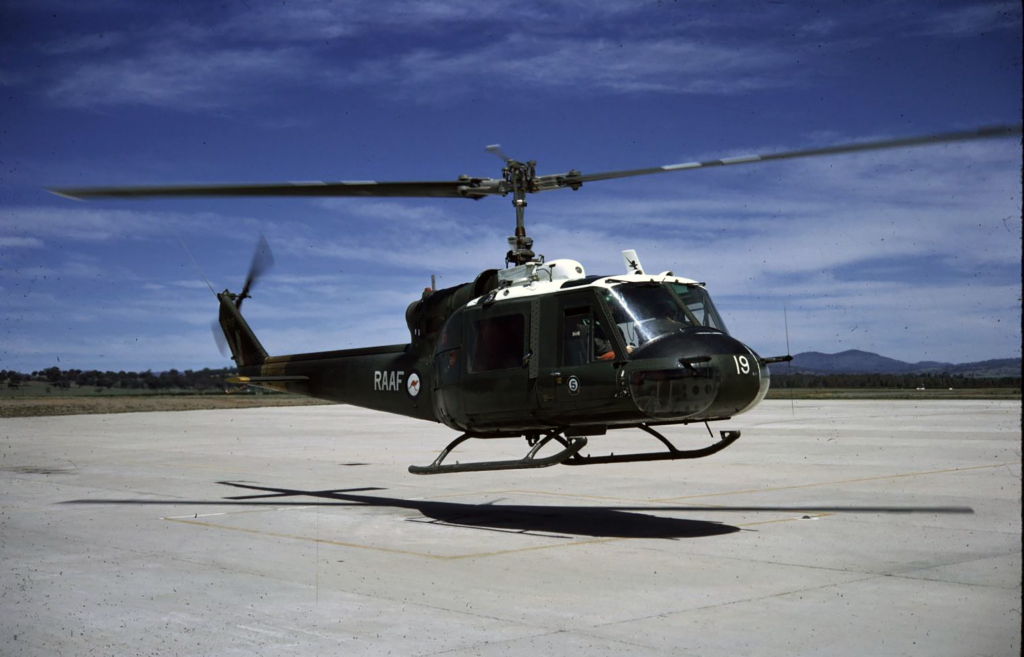 This late 1964 photograph is of No. 5 SQN RAAF Iroquois UH-1B (Bravo Model) A2-1019 in the hover on the tarmac at RAAF Base Fairbairn ACT prior to its service in South Vietnam 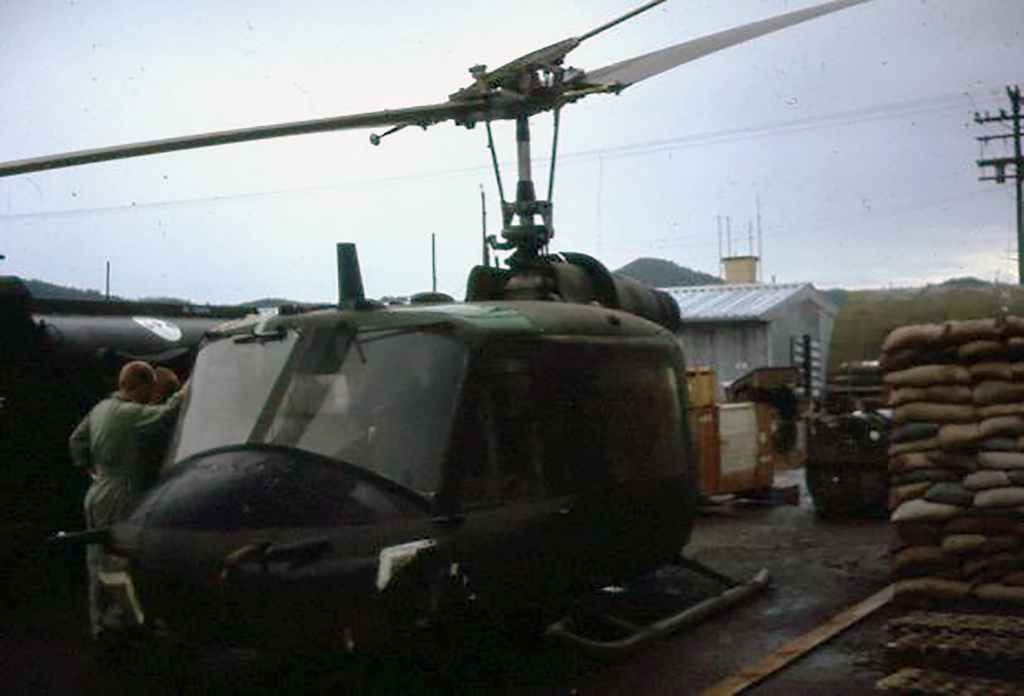 Iroquois UH-1B A2-1019 was written-off due to heavy landing damage after its L-11 engine compressor failed however, it was recovered successfully. The replacement aircraft was Iroquois UH-1D A2-649. The following is the assessment of what could be done with A2-1019 written by Clive Cotter, Senior Engineering Officer (SENGO), No. 9 SQN RAAF SVN 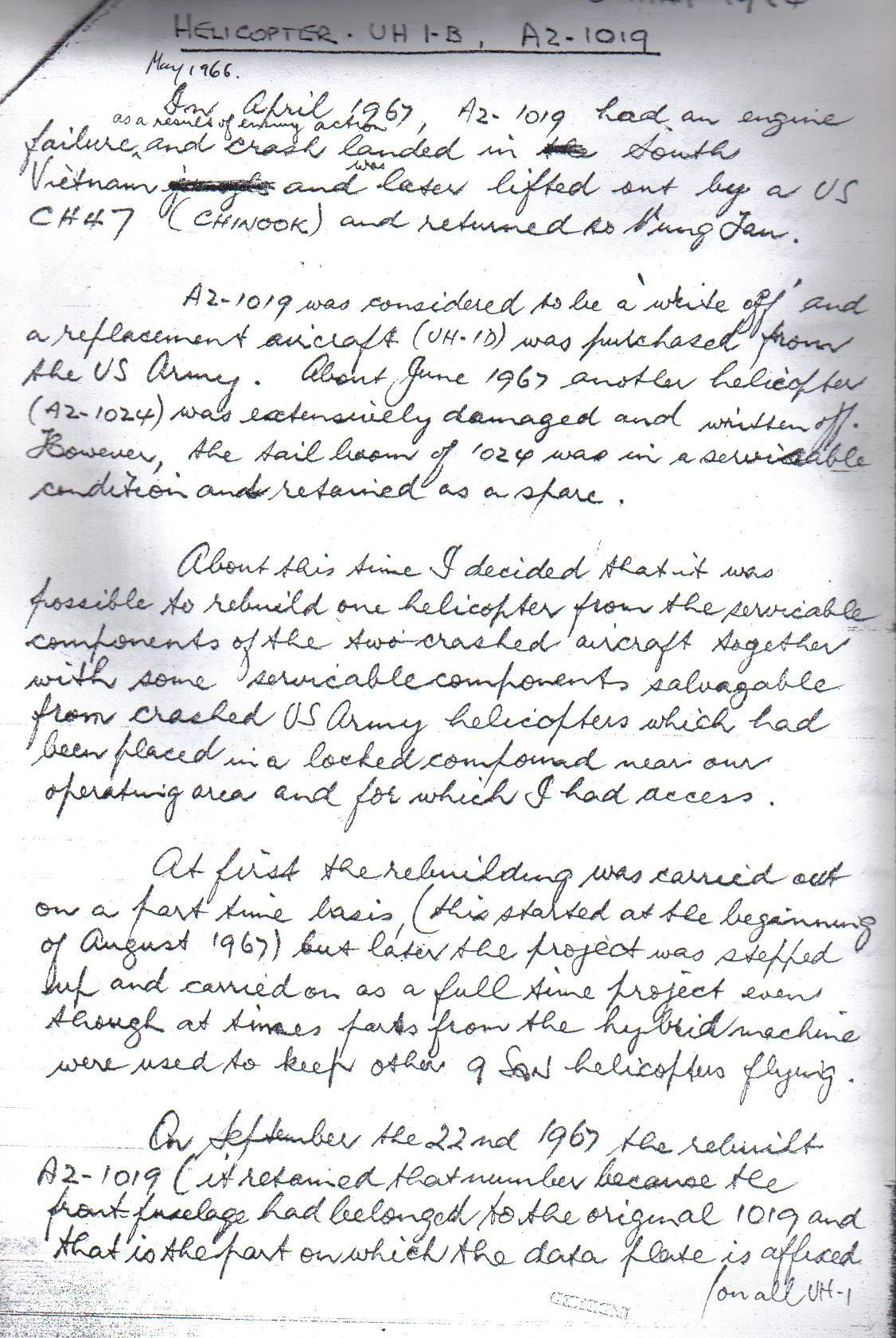 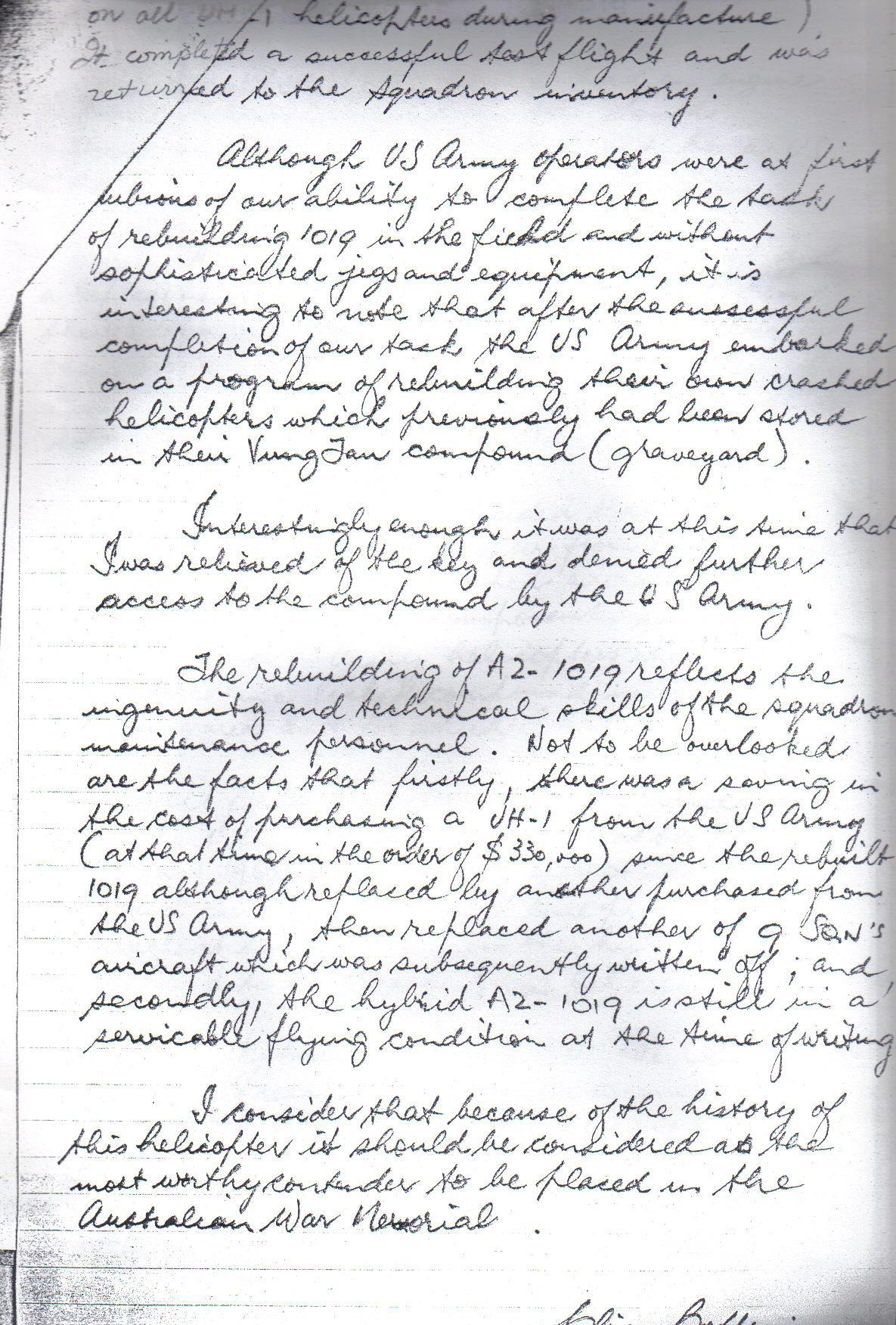 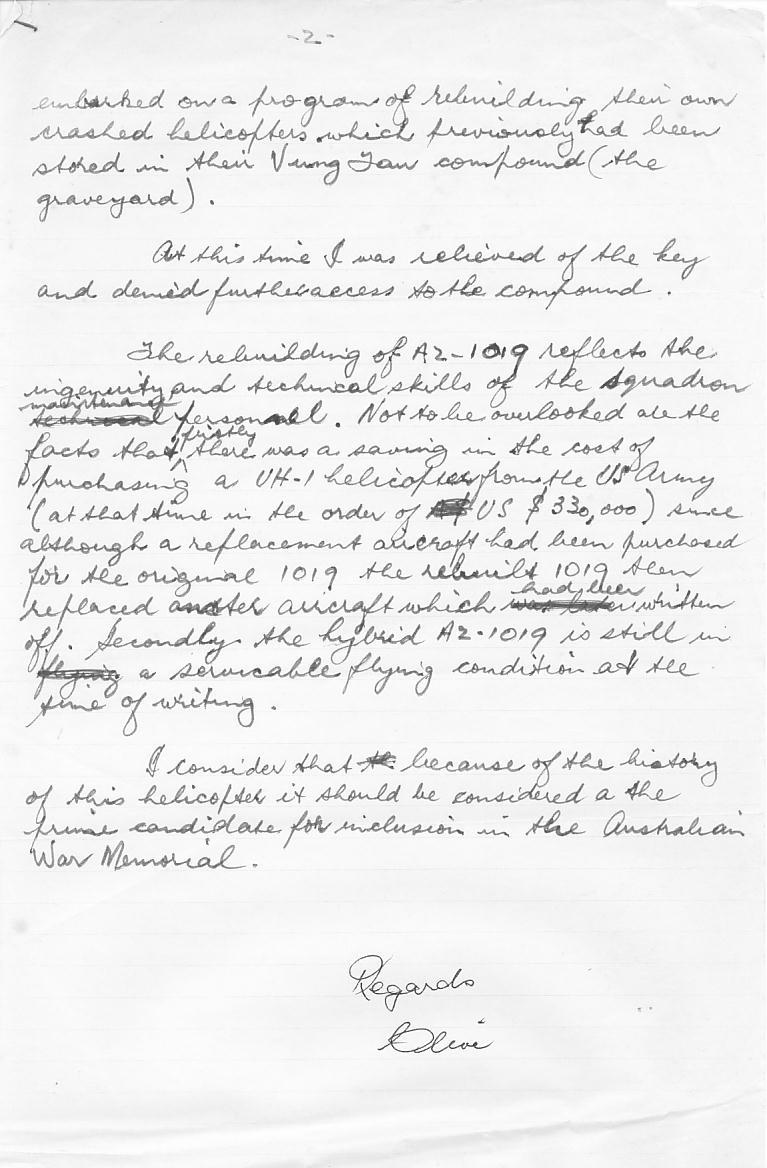 A2-1019 was progressively rebuilt by squadron maintenance personnel in the No. 9 Squadron RAAF hangar at Vung Tau; an incredible feat. 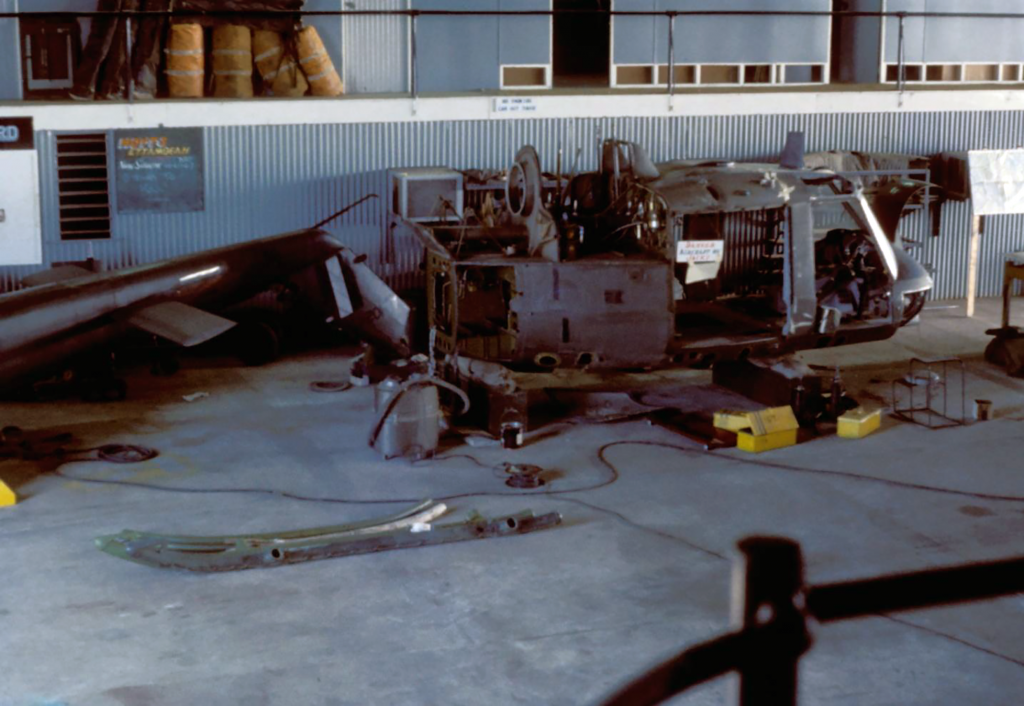 Since the AWM helicopter display was opened around 2008, A2-1019 has been the centre-piece of the Vietnam section display; two display photographs follow, courtesy of the AWM. The display is exceptionally innovative and of great historical significance for the ADF, RAAF and ARMY considering the commitment in South Vietnam became known as ‘The Helicopter War’.

Tremendous credit must go to all who were involved with mounting the display. The No. 9 Squadron RAAF Association members and their families are indebted and heartily thank the Australian War Memorial people. 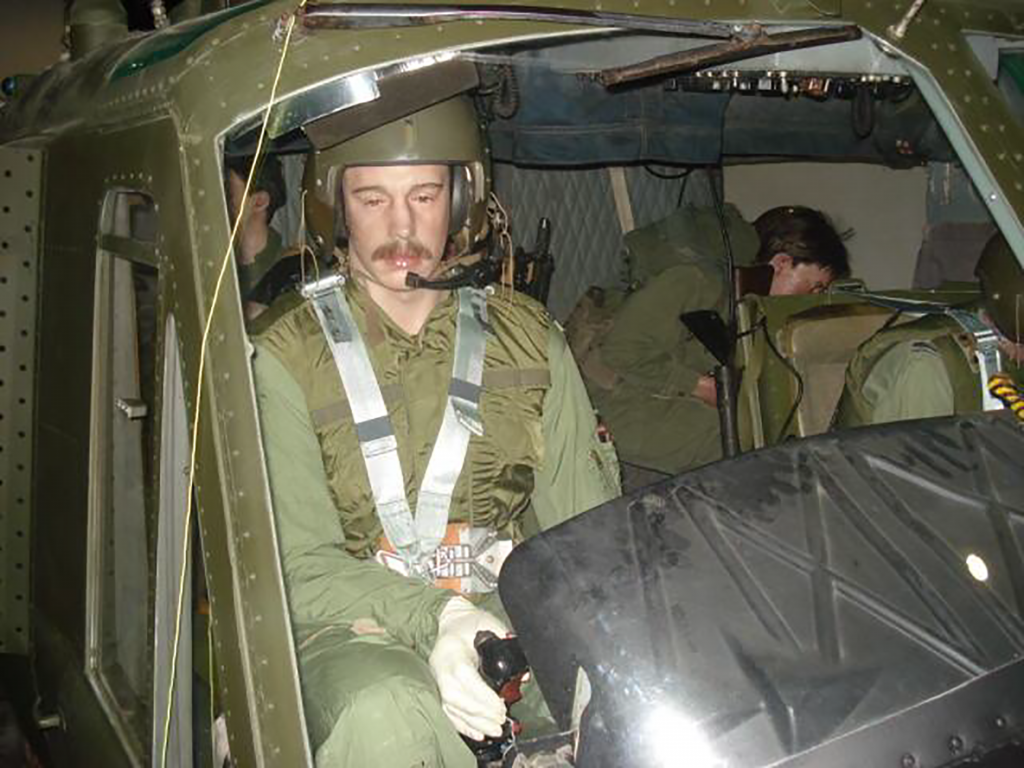 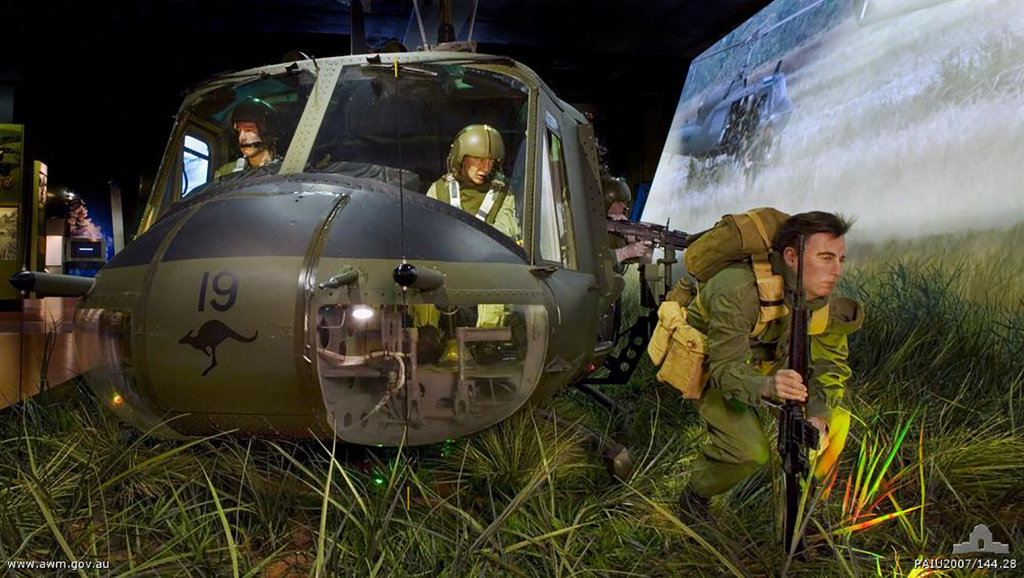