No. 5 Squadron was formed at Shawbury in England on 15 June 1917, as a unit of the Australian Flying Corps, under the command of Captain Andrew Lang, and was initially known as “29 (Australian) (Training) Squadron” of the Royal Flying Corps.

Equipped with a variety of aircraft, including Maurice Farman Shorthorns, Airco DH.6, Avro 504s, Sopwith Pups, S.E.5as and Sopwith Camels, the squadron provided training to Australian pilots in Britain during World War I.

During the war, the squadron graduated on average of eight pilots per month, who were trained by combat experienced pilots transferred from the operational squadrons. No. 5 Squadron was embarked to return to Australia in May 1919 and was for formally disbanded on reaching Australia the following month.

HMAS ALBATROSS – a Royal Australian Navy (RAN) seaplane carrier – is launched and commissioned the following year on the 29th January 1929. Personnel from 101 FC Flight embarked upon the new ship on the 21st February 1929 at Port Philip Bay.

On 20th April at Richmond New South Wales, No. 5 Squadron (Fleet Co-operation) was formed from 101 Flight.

No. 9 Squadron was formed on 1 January 1939 at RAAF Base Richmond by renumbering No. 5 Squadron. On formation, the squadron’s first commanding officer was a Royal Air Force officer, Squadron Leader J.A.S. Brown. As Australia’s only fleet co-operation squadron No. 9 Squadron operated amphibious aircraft from the Royal Australian Navy’s heavy and light cruisers; each cruiser was assigned a single Seagull or Walrus amphibian.

During the Second World War aircraft from No. 9 Squadron saw action with their parent ships in most of the world’s oceans, ranging from the Arctic to the South Pacific on vessels such as HMA Ships Hobart, Sydney, Australia, Perth and Canberra. The amphibians were used to provide their parent ships with reconnaissance, anti-submarine protection, artillery spotting and general support. While the amphibians provided important support during the early years of the war, as the war progressed the Royal Australian Navy (RAN) enjoyed considerable support from land and carrier based aircraft and the amphibians were no longer necessary.

No. 5 Squadron was re-formed at RAAF Base Laverton as an army co-operation squadron equipped with Wirraways.

No. 5 squadron was relocated to Toogoolawah for three months before redeploying to Kingaroy.

The squadron was transferred to Bowen, Queensland, from where its aircraft flew patrol operations.

No. 5 squadron was partially re-equipped with Boomerangs in late 1943 and was assigned to several different stations in Australia.

No. 5 Squadron was deployed to Piva Airfield at Torokina on Bougainville under No. 84 (Army Co-operation) Wing, and operated with units of the Royal New Zealand Air Force, undertaking reconnaissance, artillery observation, ground attack, and aerial resupply missions in support of Australian ground troops fighting against the Japanese on the island. The squadron also operated detachments on New Britain and New Guinea.

All remaining RAN cruisers had their catapults removed and No. 9 Squadron was disbanded at RAAF Base Rathmines on 31 December 1944. Casualties during the war amounted to 22 killed, many of whom were lost when the ships they were serving on were sunk. 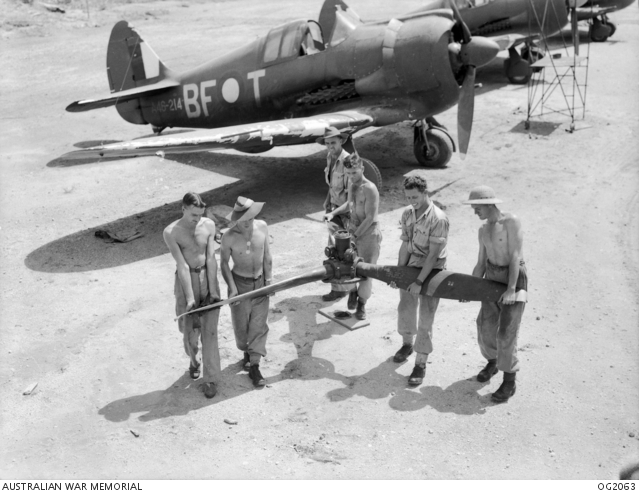 Shortly after the end of the war, the squadron received three or four P-40 Kittyhawks, but retained Boomerangs and Wirraways.

No 5 Squadron was disbanded on 18 October 1946 at RAAF Base Pearce.

No. 9 Squadron was re-formed at RAAF Base Williamtown on 11 June 1962 (under CO, SQNLDR Ray Scott). The squadron was re-equipped with UH-1 Iroquois helicopters and moving to RAAF Base Fairbairn. While originally formed to provide the RAAF with a search and rescue capability, the squadron’s main role rapidly became providing airlift to the Australian Army.

The squadron moved to RAAF Base Fairbairn, ACT, in late 1966 and on the 29th of October that year eight Bell Iroquois (UH-1B) arrived. Over the next 2 years more Iroquois were added to the squadron.

A 9SQN advanced party arrived at Vung Tau airfield in Vietnam in preparation for the squadron’s arrival.

Under CO WGCDR Ray Scott the squadron was deployed to Vietnam on HMAS Sydney with eight Bell UH-1B Iroquois. The squadron’s call sign was “Albatross”.

The squadron deployed to South Vietnam in mid-1966 as part of the 1st Australian Task Force (1ATF). On 13th June 1966 4000 kg of ammunition was frown to Nui Dat in support of 1ATF unit, 5RAR. Deploymemt included 8 x Bell UH-1B Iroquois Helicopters and about 90 personnel.

During the Battle of Long Tan on 18 August 1966 two No. 9 Squadron Iroquois flown by Flight Lieutenants Cliff Dohle and Frank Riley completed a hazardous mission to resupply D Company, 6 RAR which was heavily outnumbered and running dangerously low on ammunition. The mission proved vital in ensuring the survival of the Australian infantry until a relief force could fight its way through from Nui Dat and was completed despite heavy rain and the risk of ground fire. Following the withdrawal of the Viet Cong a number of helicopters were used to evacuate the Australian casualties from the battlefield. RAAF-Army relations improved considerably following Long Tan. No. 9 Squadron subsequently developed new operational concepts and procedures, achieving consistently high rates of aircraft availability, mission success and a low loss rate. A close professional relationship was also developed with the Special Air Service which saw the squadron provide rapid and precise insertion and extraction of patrols into jungle landing zones at tree top height.

The squadron was re-equipped with updated versions of the Iroquois, and was also reinforced with personnel from the RAN and the Royal New Zealand Air Force. Operations in South Vietnam proved hazardous, with aircrews regularly exposed to ground fire, poor flying conditions, nighttime medevacs and dangerously small jungle landing zones that were sometimes booby trapped with land mines. The unit lost seven Iroquois and two crewmen in action during its deployment. 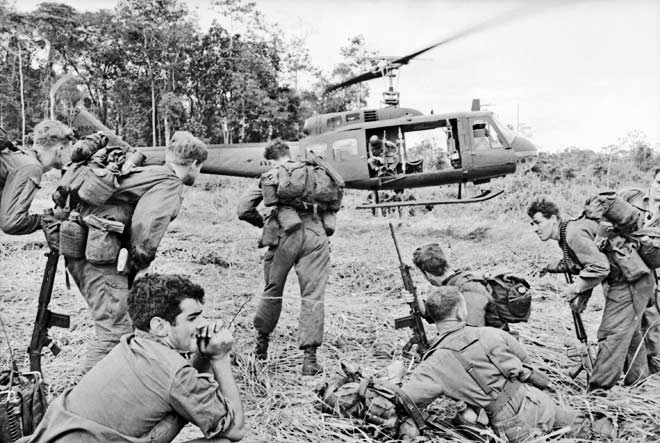 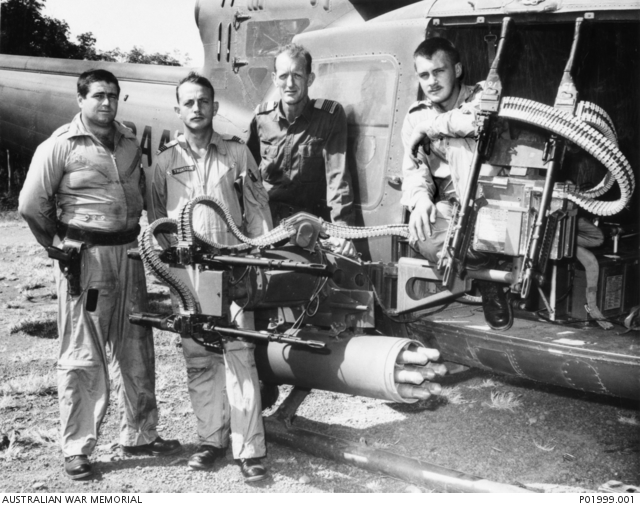 Starboard view of No. 9 Squadron RAAF Iroquois helicopter gunship, UH-1B A2-1025, commonly known as “Ned Kelly”. This aircraft was the first RAAF helicopter to be fitted with a trial armament system which was fitted to each side of the helicopter.

Vung Tau Airfield came under heavy enemy rocket attack and a US Caribou was destroyed. 9SQN equipment was damaged and personnel came under enemy ground fire as they recovered helicopters from the field. 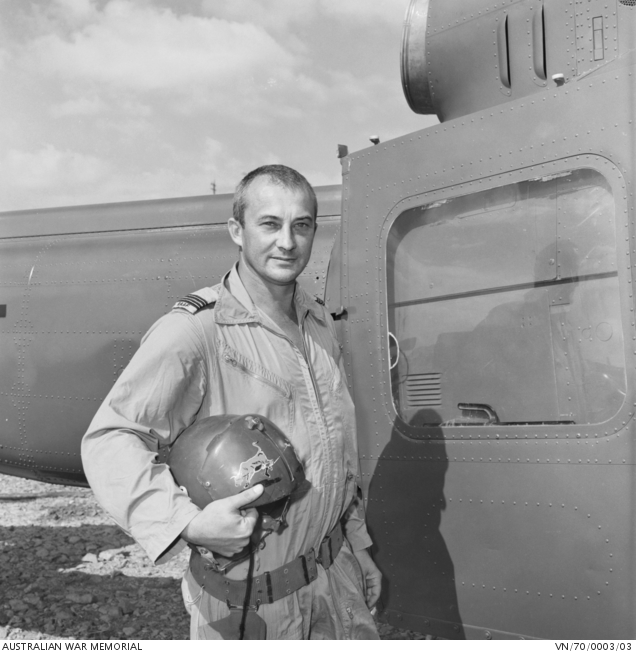 After 5 and a half years of combat, No. 9 Squadron departed South Vietnam on 8 December 1971. Upon its return to Australia, No. 9 Squadron was based at RAAF Base Amberley, where it continued to provide airlift to the Australian Army and search and rescue for the civilian community.

In the mid-1970s and mid-1980s, No. 5 squadron contributed Iroquois to peacekeeing missions in the Middle East Egypt, firstly to Ismailia with the United Nations Emergency Force and then later to the Sinai as part of the Multinational Force and Observers

Between 1982 and 1986, No. 9 squadron contributed eight aircraft and aircrew to the Australian helicopter detachment which formed part of the Multinational Force and Observers in the Sinai Peninsula of Egypt.

No. 5 squadron acquired AS350B Squirrel utility helicopters in early 1984, and along with the Iroquois UH1-Hs, the squadron continued the training role and Army support, in addition to providing aid to the civil community in times of natural disaster.

In December 1989, No. 5 Squadron was disbanded and absorbed into the Australian Defence Force Helicopter School (ADFHS) in 1990.

During February 1988, No. 9 Squadron was re-equipped with S-70A Blackhawk helicopters. Upon converting to the new aircraft the squadron moved to Townsville where it was disbanded on 14 February 1989. The squadron’s aircrew and aircraft were then used to form ‘A’ Squadron of the Australian Army’s 5th Aviation Regiment. The squadron’s last commanding officer was Wing Commander (later Air Chief Marshal) Angus Houston.