The Albatross And The Buffalo

The History of 9 and 12 Squadrons of the RAAF 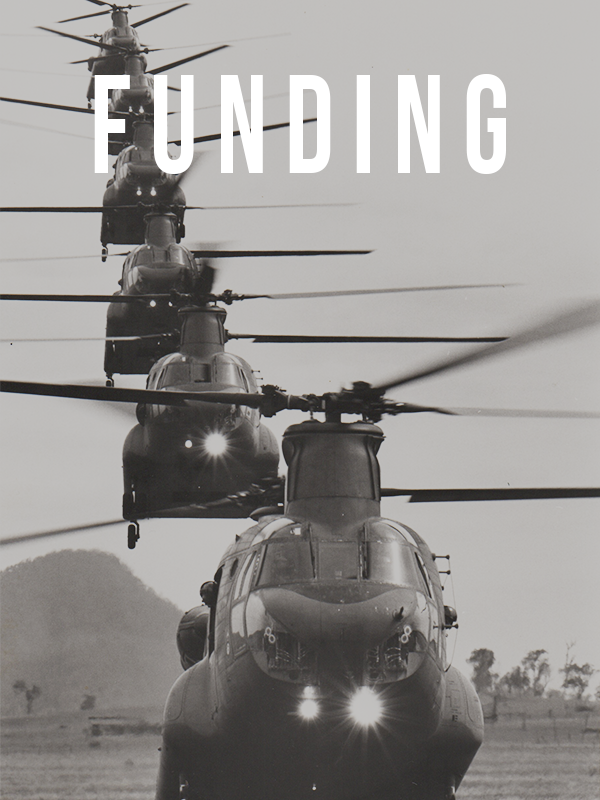 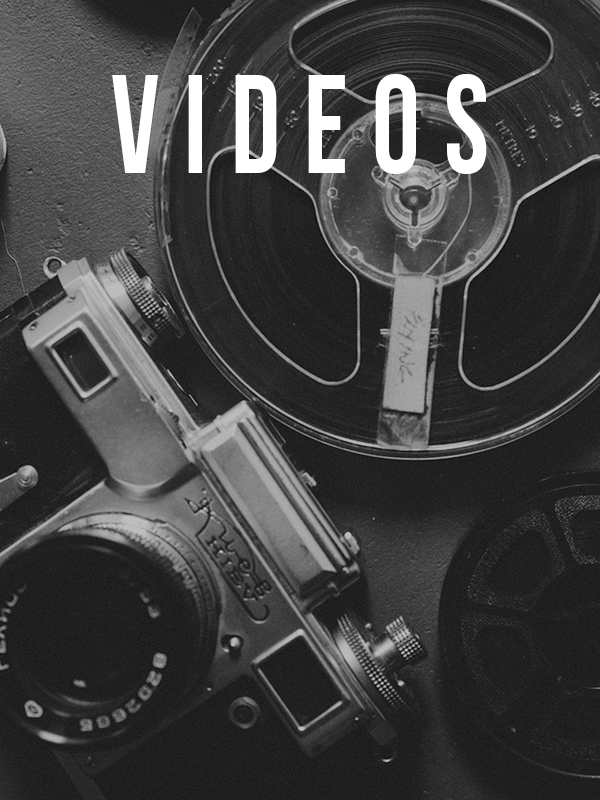 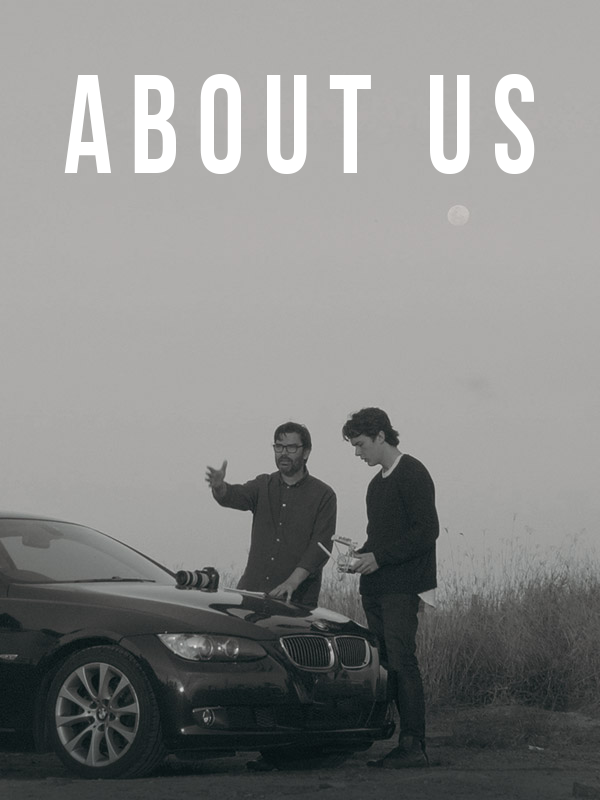 We are creating an enduring record of the story of 9 and 12 Squadrons of the RAAF by creating a time-line for each squadron with images, interview and stories.

12 Squadron Working With The Australian Army

David "Hendo" Henderson talks about the working relationship between 12SQN and the Australian Army.

David "Hendo" Henderson talks about the teamwork he experienced working in 12 Squadron.

On the 26th of April, 1989, a 12SQN Chinook came to the rescue of a disabled yacht 100nm off the Queensland coast. Crew on the mission:Captain - Grant Frost; Copilot - Glen Foster; Loadmaster - Neil McCamish; Flight Engineer - Peter Renton; Medical Officer - Greg...

The Canberra Times, Tuesday, February 5, 1985: An RAF officer was seriously ill in hospital last night after an RAAF Chinook crashed into a dam on the Darling Downs in south-cast Queensland yesterday morning. Flight Lieutenant Charles Chubb was one of four in the... 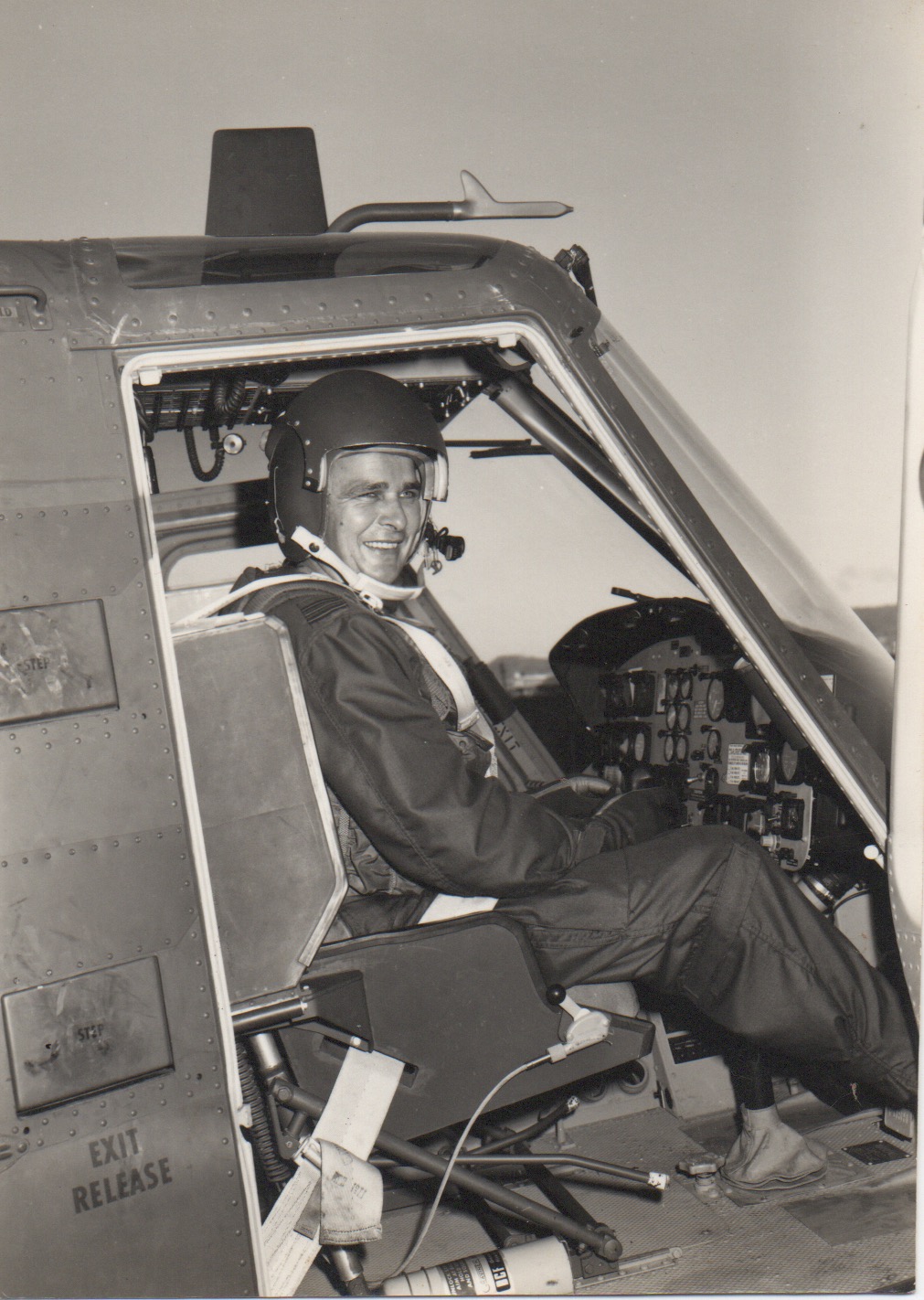 I grew up around RAAF bases. My father was a helicopter pilot and as a kid, his world seemed larger than life. Stories of Vietnam, visiting the base and being held spellbound by the amazing aircraft, catching rides in the back of a Chinook, even having dad bring a Chinook to my primary school for show-and-tell (I still wonder how he justified that one… public relations maybe?).

All these memories came flooding back when I received some photo albums and boxes of memorabilia my mother had kept stored away. Photos of faces I could recognise, names that rang a bell, images that reminded me of the smell of “avgas” and the woca-woca sound of helicopter rotors. I wanted to know the stories of these men and their machines that was so much a part of my distant past. But I can’t ask my father as I lost him to cancer when I was in my early 20s, not too long after he had retired from the RAAF. This has given me a sense of urgency: What other stories have been lost, and what stories do we still have an opportunity to capture?  A feature length documentary that would honour the legacy of all who served in 9 and 12 squadrons would capture these stories and serve as an enduring reminder for generations to come. This is the motivation to do this documentary.

Both squadrons were operational during World War II, but it was the re-forming of these squadrons from the 60s and 70s that we most are most familiar. No. 9 Squadron was re-formed in 1962 and equipped with Iroquois helicopters, becoming the indispensable airlift service to the Australian Army in Vietnam. After the war the squadron, based at Amberley, continued to provide airlift tot he Australian Army, civilian search and rescue operations, and international peacekeeping operations.

No. 12 Squadron was re-formed at Amberley in 1973 and equipped with 12 Chinook helicopters in 1974. 12 Squadron was the RAAF’s big muscle in helicopter airlift capabilities and supported the Australian Army as well as a host of other duties such  as air-sea rescue, flood relief, and recovery operations.

This is the story of these RAAF helicopter squadrons and the crews who devoted themselves to serving Australia both in war and peace. 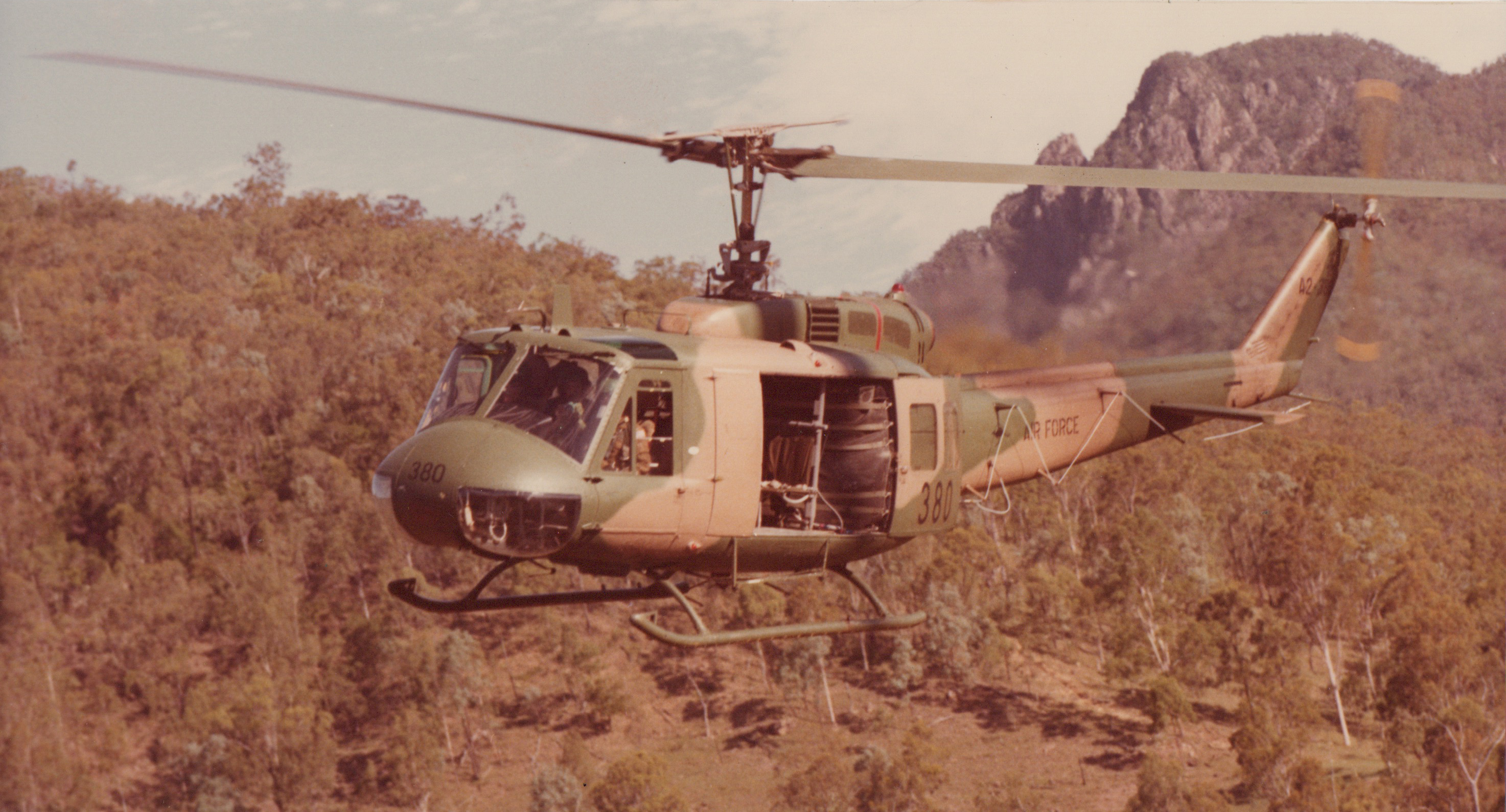 The Iroquois are probably the most iconic piece of military machinery associated with the Vietnam war and for good reason – they were critical in transporting soldiers and supplies as well as providing air cover and medivac. It was a workhorse like no other and aircrews became highly adept at insertion and extraction in jungle locations. The SAS and regular army relied on these men and machines to get them in and out of difficult places exposed to ground fire.

The Chinook is a unique helicopter with heavy-lift capabilities that are still required today by the Australian Defense Force. We may have seen RAAF Chinooks operate in the Vietnam war if the Australian Government could have acquired them in the mid-60s but order delays forced the Government decision to purchase more Caribous and expand the fleet of Iroquois. It wasn’t until 1974, in a re-formed 12 Squadron, would Australia have the flexible and heavy-lift capabilities of the Chinook. The squadron performed many military and non-military tasks during it’s time. In 1980 eight Chinooks were flown in formation (the image below is of the crews just after the formation flight) and earlier the same year a Chinook was flown to Malaysia to recover a downed S-61 helicopter – the longest distance a helicopter had flown at the time. 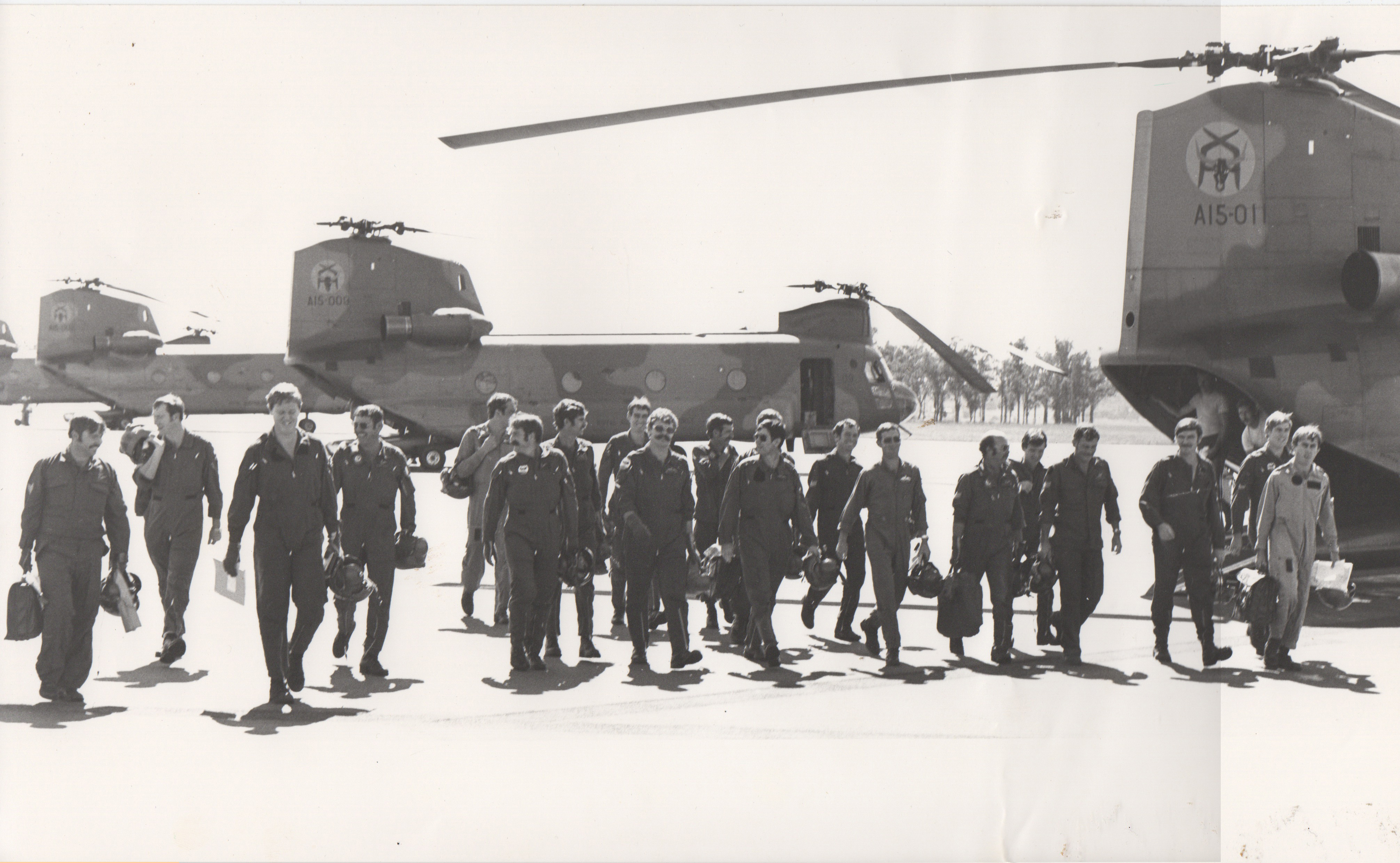 Matthew is the Producer/Director at Perfekt Studios and happens to be the son of the late Wing Commander John Dahlitz of 12 Squadron. Matthew is highly motivated to use his creative skills as a filmmaker to produce a documentary that will leave an enduring reminder of 9 and 12 Squadrons for generations to come.

Matthew has a diverse background in the arts, business, and social sciences, holding several degrees and having worked as a paramedic, film composer, film producer, commercial developer, consultant, and neuropsychotherapist. His recent work in corporate and brand awareness video and film production in general holds him in good stead for this current project.

Learn more about Matthew here and more about what Perfekt Studios does here. 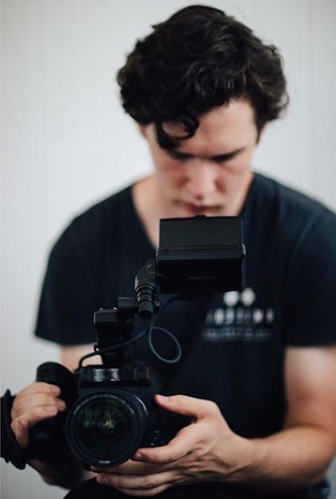 Jachin is Perfekt Studio’s multi-talented photographer, cinematographer, editor and color grader. Jachin did not get to meet his grandfather, Wing Commander John Dahlitz (shown here at about the same age strapped into a Vampire), but through this project will get to learn about his grandfather’s legacy and the many great men and women who served alongside him.

Jachin has a keen sense for maximising what we call “production value” – those elements that give a film the best aesthetics within the confines of equipment, budget, and location. The ability to capture a great story with the very best visuals, in a timely manner and at a low cost are all valuable skills Jachin brings to the table. His use of light-weight professional gear and nimble techniques during a shoot, means we can get great footage in a fraction of the time and cost of traditional production crews. 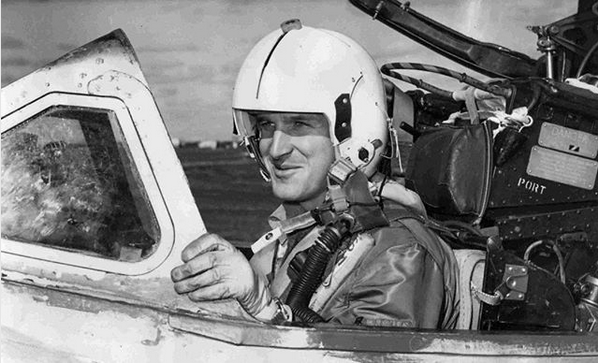 Editing is all about rhythm and pace, something that Jachin has an innate sensibility for. Just like music, the rhythm of the editing has an ebb and flow that dances with the picture, music, sound design, and narration. You shouldn’t notice really good editing, but you will notice poor editing and it will distract from the story. This is why we are so fortunate to have Jachin who not only knows how to shoot a good film, but how to edit it seamlessly as well. You can learn more about Jachin here and see some of his shooting and editing talent in many of the videos here. 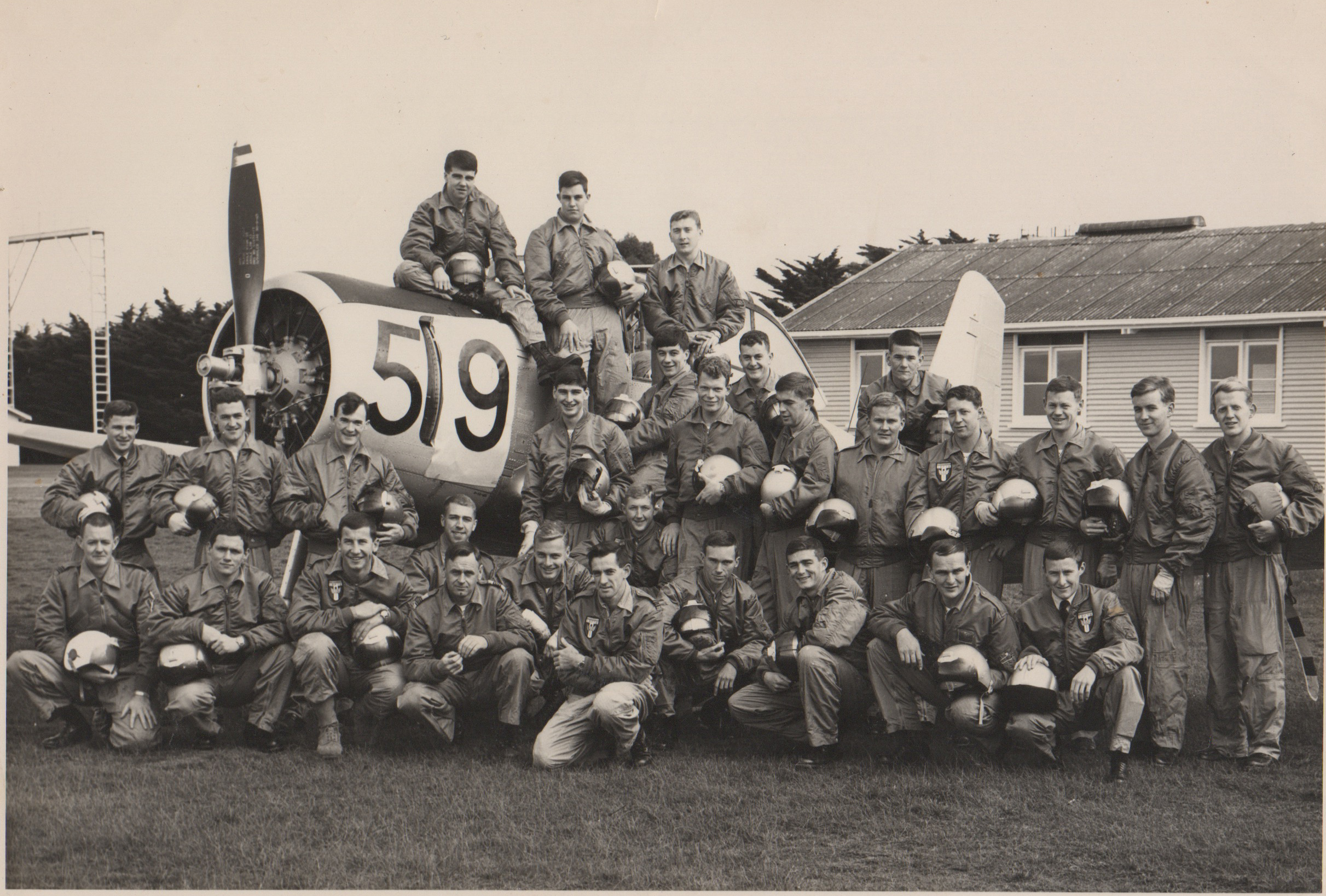