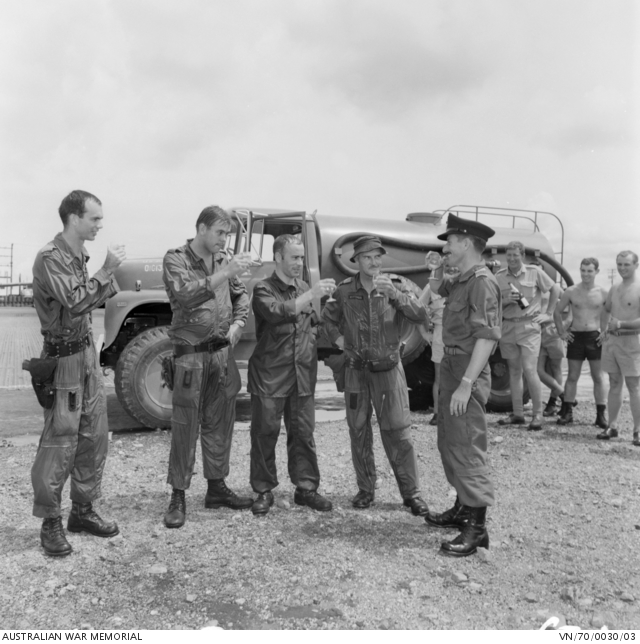 June 18, 1970 marked an important day for 9 Squadron. After four years of the Huey,  a new and impressive milestone had been reached; 40,000 hours of flight time.

For 9 Squadron, most of these hours had been logged in South Vietnam. In particular, operational sorties were often conducted within Phuoc Tuy Province. This area was of particular importance not only to 9 Squadron, but for a large portion of the Australian armed forces in Vietnam. After the Australian Governments decision to expand operations in Vietnam to a task force on March 8 1966, Phuoc Tuy was chosen as the site for the task force base.

In the footage, Pilot Officer Darryl Holden (Port Moresby, New Guinea), Flight Lieutenant Dick Wittman (Page, ACT), crewman LAC Joe Pettit (Wagga Wagga), and gunner LAC Tony Wheeler (Penrith, NSW) touched down from an operational sortie at Vung Tau. During their sortie, the crew had passed the 40,000 hour time of combined flight hours. Upon touchdown, the other members of 9 Squadron met them on the tarmac, showering them with a hose in celebration. As the milestone was important to the squadron, cameramen were brought out to record the event. Wing Commander Peter Coy (Hackett, ACT) was also there to meet the crew, where a bottle of champagne was opened to mark the occasion.

People in the above photo (left to right):